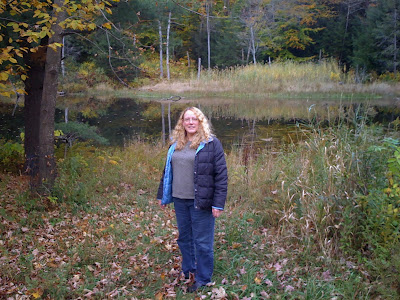 [photo by Jacqueline Gens of Valerie Shippee by her pond]

A few weeks ago I met Val Shippee (as she is known) at a party hosted by Marie Stella of Beaver Lodge for all our neighbors on Barnes Road and East Buckland Road near Khandroling, the Dzogchen Community retreat land. At the party Val and I decided to get together later inviting me to visit her home. Warm hearted and generous, Val has lived in the neighborhood for thirty-five years where she and her husband, Ron, raised three children. They love their land, which is well groomed with wonderful trees and bushes carefully planted over the years and they are passionate about the neighborhood, especially our retreat land Khandroling, where neighbors  walked, picniced and swam for decades.


While walking around her land, I noticed grazing in her next door neighbor's yard that famous donkey we all know so well who boldly likes to catch a ride with moving vehicles. Otherwise gentle, this "fellow" is especially adept at crashing into the slow moving drivers side of one's vehicle where you don't want to have an open window. He mostly roams free and far so now that you are  forewarned you shouldn't be too much in shock when he first crashes into your car out of nowhere. 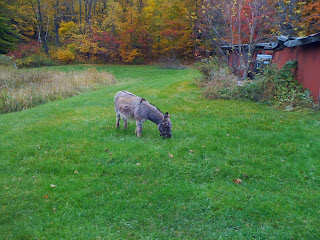 Val caught my attention at Marie's party when over the din of chatter and tinkling glasses I heard her mentioning Mary Lyon's writings about the top of the hill, none other than that sacred rock with the longsal symbol carved into the bark and the site of so many teachings. I knew that writing myself even doing an article in the Mirror back in the 1990's. If you've been to Khandroling, you would know that the Mary Lyon homestead with it's crisp clear well that flows endlessly is situated  close to the Khandroling land at the bottom of the hill. 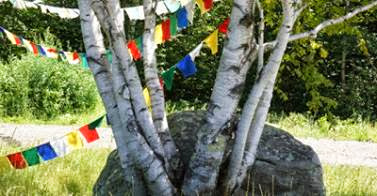 In Mary Lyon's own words:

"Then just beyond the precincts of the family domain was the 'top of the hill,' crowned with its high rolling rock, ever inviting the enterprise of each aspiring heart. Everyone was ambly repaid who would climb tha steep hill, and ascend that high rock."

(a letter from Mary Lyon quoted in a her 1864 biography, A Life of Christian Benevolence)

Val was talking at the party with a local historian and docent of all things Mary Lyon. Naturally, she would  know about Mary Lyon, the great 19th educator because of her own work at Sanderson Academy for the past twenty-five years where Mary Lyon first studied as a young prodigy and later taught. Val is also a certified Reiki healer, which is to say, someone sensitive to energy.

For the rest of the party I had a grand time speaking with Val about my own passion for Mary Lyon as one of the great transformers of human society-- a true dakini who sprung out of a remote corner of Western Massachusetts and whose intellectual projeny would travel to the most distant corners of the world spreading literacy--especially to women.  It always gives me goose bumps to consider that same precious place over time, which would open its corridor into other realms to receive the profound teachings transmitted by Goma Devi. We also spoke of the work of author Peter Champoux, a local resident,  whose calculation of ley lines indicates that Shelburne/Buckland is at the center of the North America Tectonic plates and thus a power spot. Indeed that is what the land feels like to everyone who ever traverses near it.
Here is what Val had to say about living in the neighborhood: 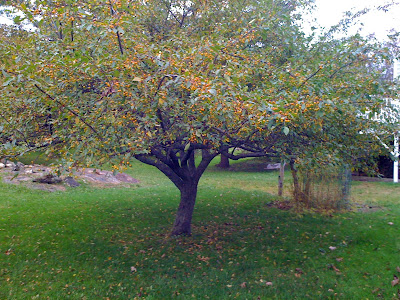 It is a conscious decision we have each made, to live here in a secluded area on the mountain. I am so grateful for the thoughtful neighbors who are good friends and new acquaintences who also appreciate the beauty of nature. The quiet surroundings nourish our spirits and offer the opportunity for meaningful thought, meditation, & recreation.  Living simply is a true gift.

[Japanese crab apple tree planted by Val]
Posted by Jacqueline Gens at 5:17 AM