Rinpoche is kindly offering again to those of his students who are interested in visiting Bhutan with him, the possibility to join him. He has asked us again (Tsering and David) to organize the trip.

We are organizing accommodation for everyone from the group in the same hotel where Rinpoche will stay and give teachings. We have already signed the contract with the hotel. There are very limited rooms.

We will close the registration by the end of April 2015

Posted by Jacqueline Gens at 2:34 PM No comments:

Request for Karma Yoga Helpers from the Red Gakyil 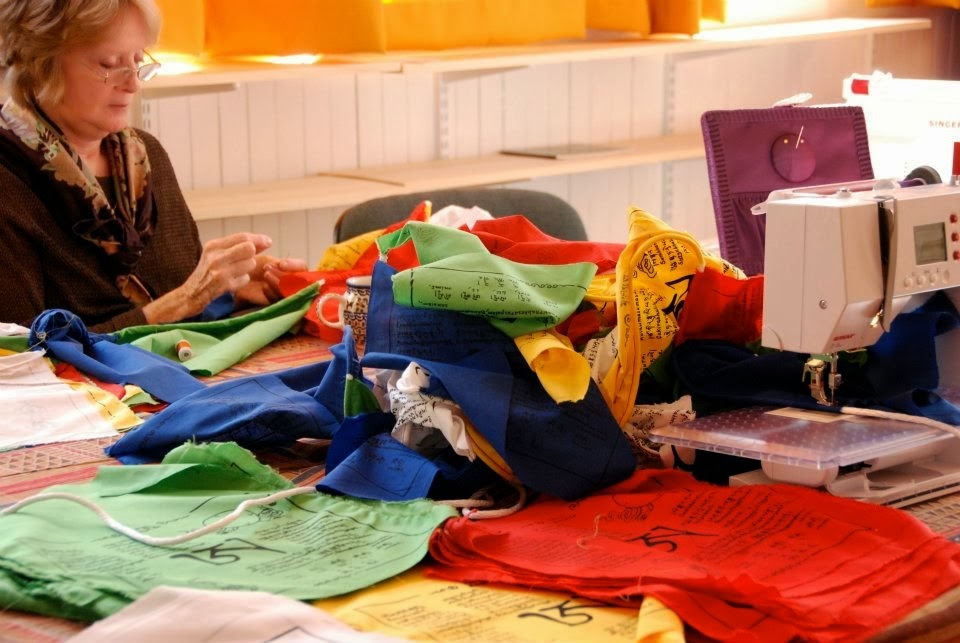 Tsegyalgar East is currently organizing and preparing for the retreat of

Chögyal Namkhai Norbu July 1-5, 2015 this summer. In order to accomplish the many tasks involved, we need karma yoga helpers to bring the retreat to fruition. 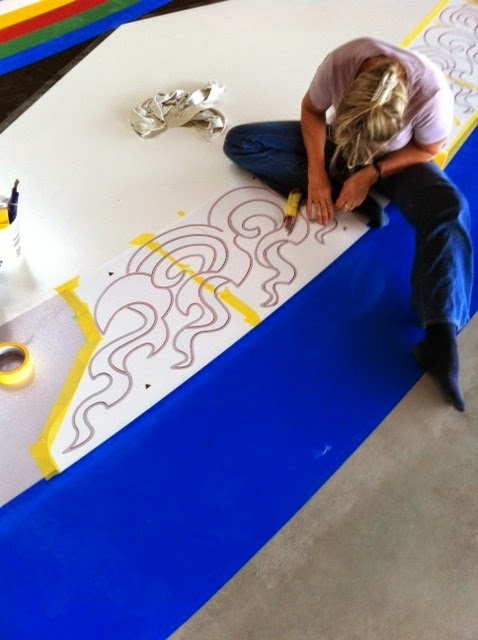 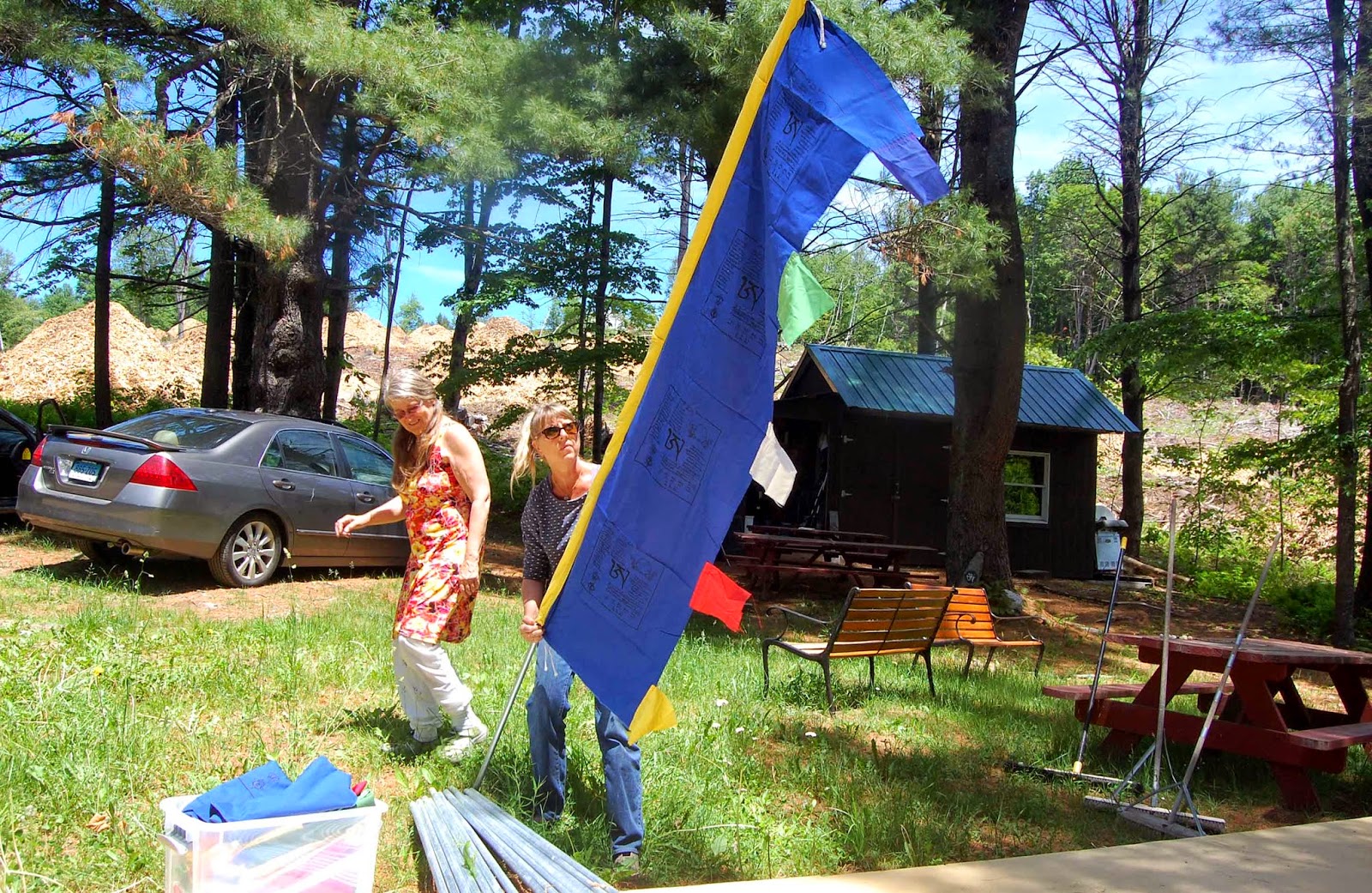 Thanks so much.
Red Gakyil
Posted by Jacqueline Gens at 2:49 AM No comments:

First Day of Spring in NYC 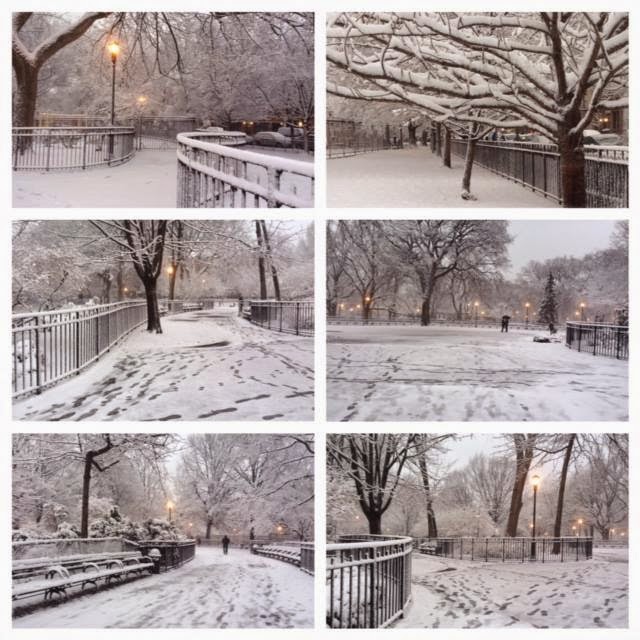 Posted by Jacqueline Gens at 8:33 AM No comments:

Next International Practicing Together Date is April 4, 2015 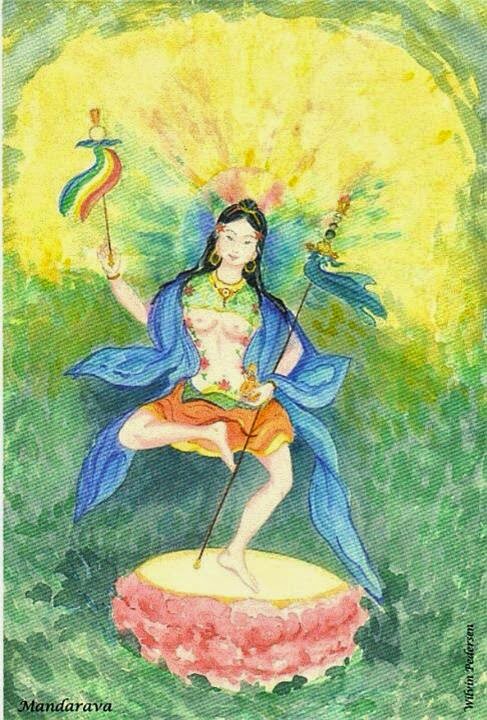 The next international Practicing Together live webcast date is

The webcast will originate from Hungry with a Mandarava Ganapuja
especially dedicated to the good health of our beloved Master and all those in need of healing.

Visit the link below at the designated time.
To access the international Time converter click on EDT above.

This time allows for the practice schedule to connect most practitioners from all
over the world so that we can follow together.

May this practice benefit all sentient beings.

For further information visit the the Practicing Together site at : www.practicingtogether.org

(Painting of Mandarava by Wilven Pedersen)

Posted by Jacqueline Gens at 9:50 AM No comments:

Special Announcement about the Worldwide Day of the Dance of the Vajra on March 15, 2015 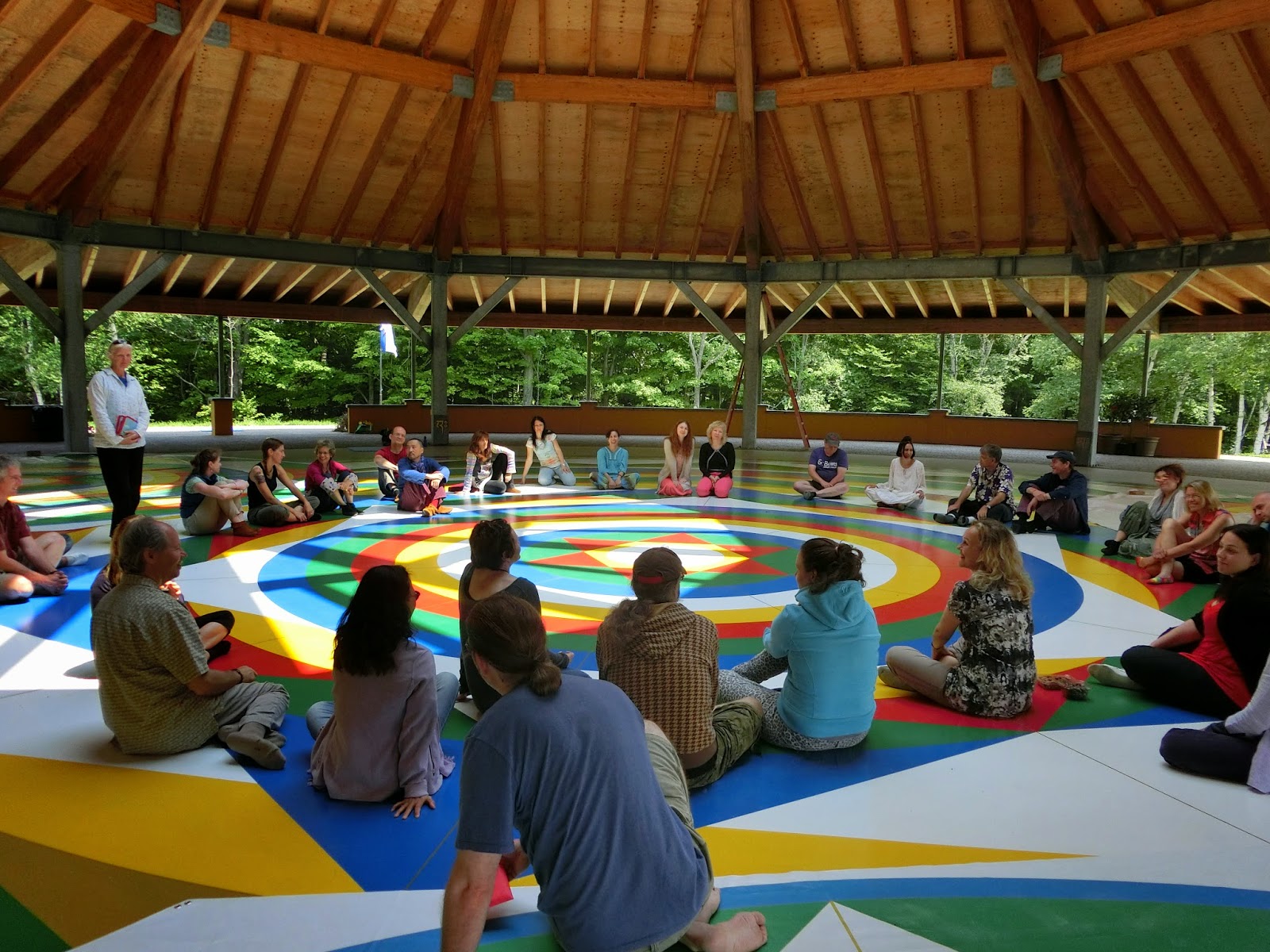 We are delighted to announce an important initiative for the Worldwide Day of the Dance of the Vajra, which this year falls on Sunday, 15 March.

At 3PM Italian time, Prima Mai will lead an explanation and practice session on the Khalongdorjeikar Dance, also known as the Dance of the Twelve As.

We will transmit this session via closed webcast to everyone who requests access in exchange for a small offering.

After the session we will post the video of the practice online since it will be a useful tool for improving your practice.

Check here for the hours corresponding to your local time zone:
http://www.timeanddate.com/worldclock/fixedtime.html?msg=KDK&iso=20131115T1530&p1=683&ah=1

If you are interested in participating, please complete this form by no later than Saturday, 14 March, to ensure that you can receive the password on time.
https://docs.google.com/forms/d/1Nmu1v2PGkviUupUVBQ3DE5WKNpWw6MhCvsjBUJ_Ep1M/viewform

To help cover the costs for organizing this course, we are asking participants to contribute an offering of 10 euros to the Dzogchen Community of Merigar. We’ll use it to cover the cost and to improve the mandala hall. ​The lings and groups can do a free offer​.
--
COMUNITA' DZOGCHEN DI MERIGAR
LOCALITA' MERIGAR
58031 ARCIDOSSO (GR)
TEL. 0564 966837
EMAIL office@dzogchen.it
WEBSITE www.dzogchen.it
Posted by Jacqueline Gens at 7:13 PM No comments:

A Special Offer for Vajra Dancers coming to Tsegyalgar for both retreats July 1 – 12, 2015 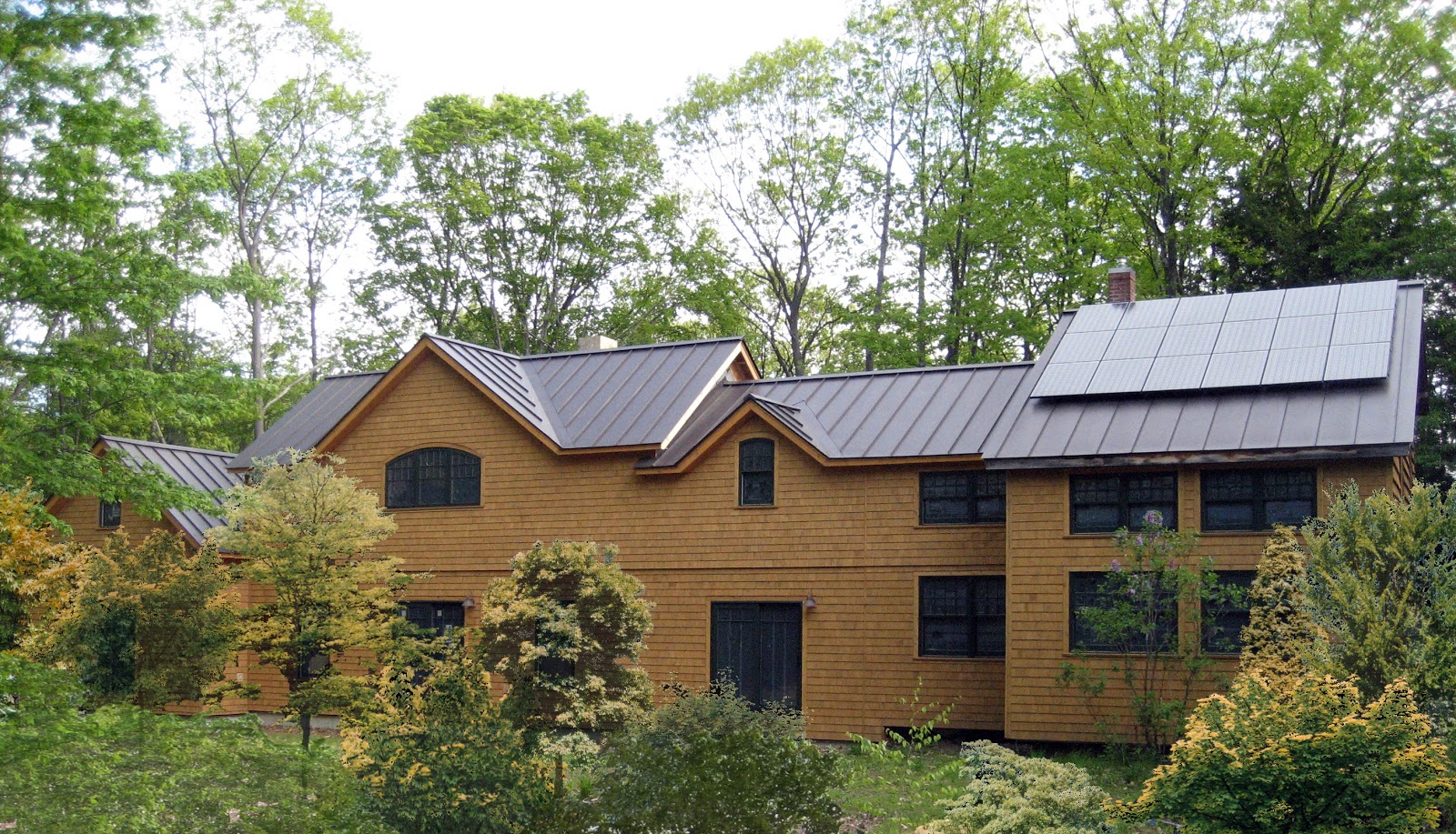 Our Khandroling neighbor, Marie Stella, will once again host visitors at Beaver Lodge, an eco Bed and Breakfast located 1 mile from Khandroling. Make your reservations early to save your place.

Posted by Jacqueline Gens at 4:31 PM No comments:

March 15, 2015 Join us for a Ganapuja followed by a Community Meeting 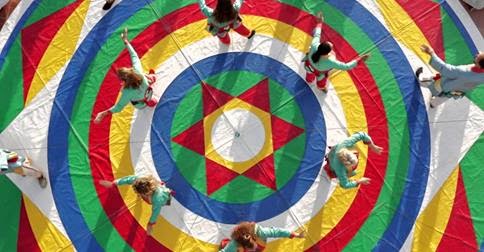 Anniversary of Ayu Khandro & International Day of the Vajra Dance

Posted by Jacqueline Gens at 7:53 PM No comments:

Necklaces made by Chögyal Namkhai Norbu for Dzamling Gar Fundraising

Recently Chögyal Namkhai Norbu hard began to make necklaces as a fundraiser for Dzamling Gar's Gonpa Development project. To view the dozens of his personally crafted creations, each one unique, visit this link on the Mirror website. The project is called Evolution Creations.

Dzamling Gar is the International Gar in Tenerife, Spain. To read more about their exciting new projects visit their website at http://www.dzamlinggar.net/en/
Posted by Jacqueline Gens at 7:00 PM No comments:

This winter the New England northeast has received a negative rep for being unbearably cold with harsh wind conditions, Going beyond such limited points of view, some of our community have documented the landscape with exceptional results. Facebook seems to be the repository of these pictures.
here are a few:

Kathryn O’Connor form NYC captured the East River in photos that convey the romanticism of a cityscape from bygone eras. 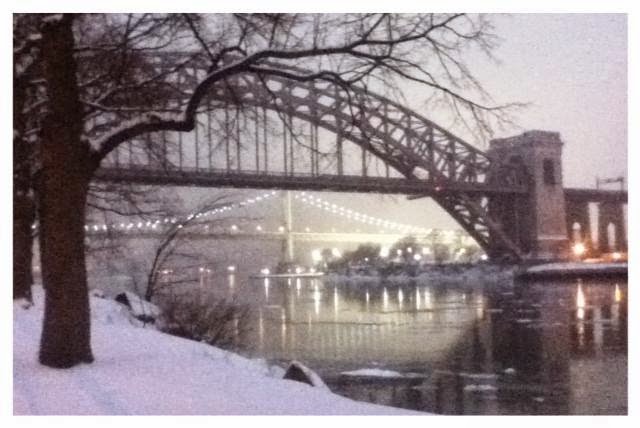 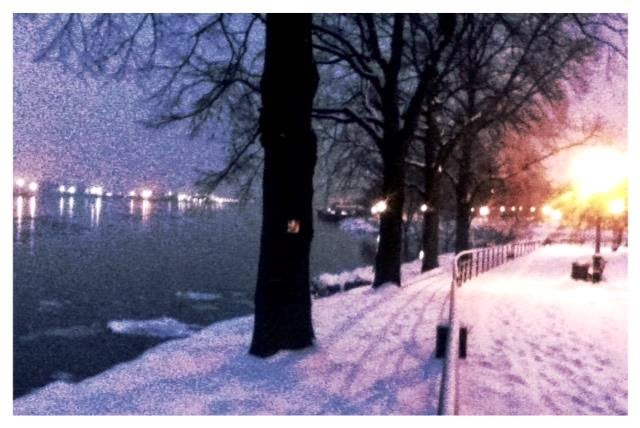 Sean Quinn from Shelburne Falls often captures photos of local farms on his way to and from work, which he posts on his Facebook page. His photos of Khanrdoling nearby during every season offer vast views via the wide angle lens he often favors when photographing on the land.  You can see many of these on the Khnadroling Facebook Page, which you can join.

Here are a few recent winter scapes of Khandroling  he posted on Facebook the other day: 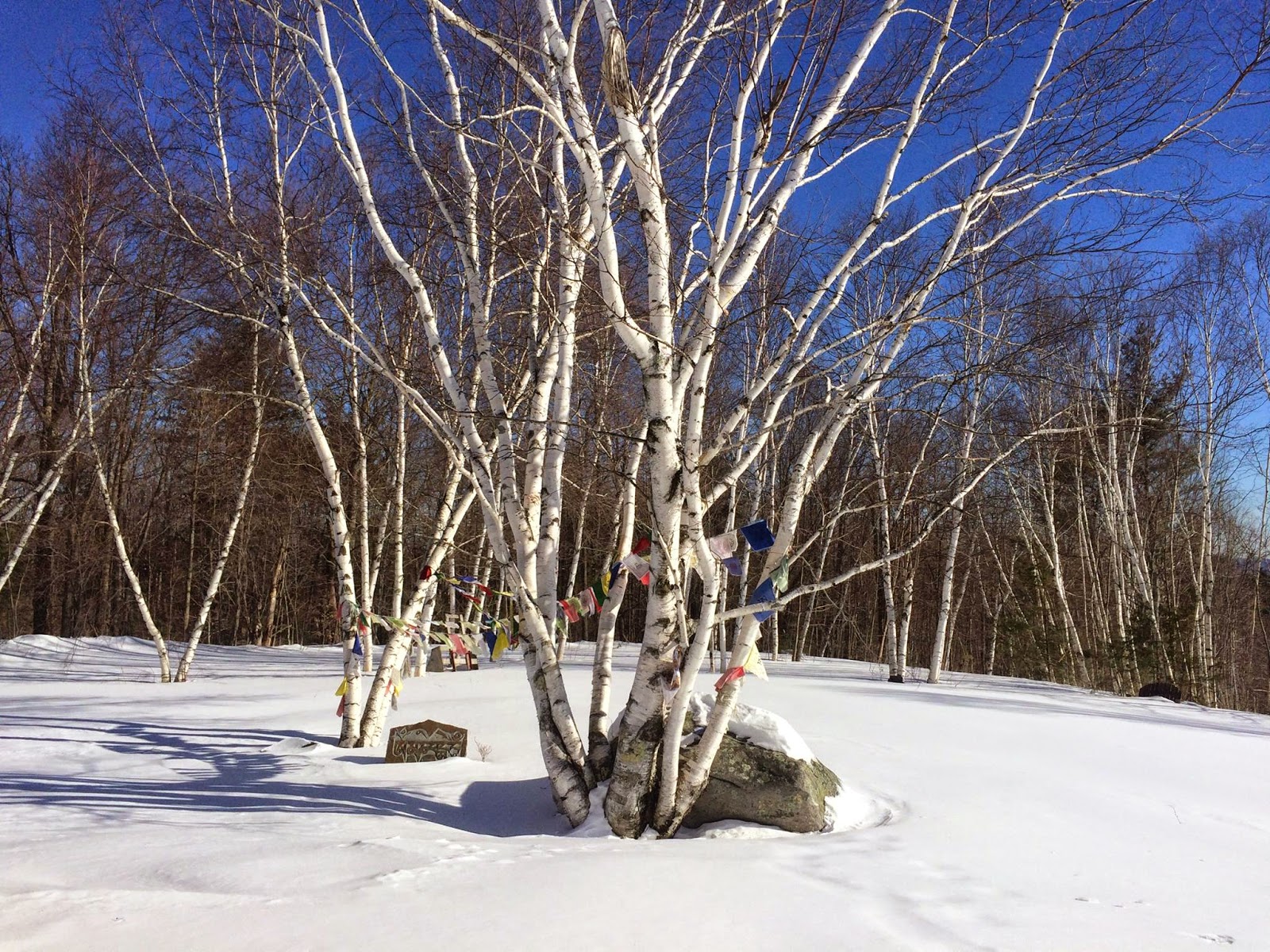 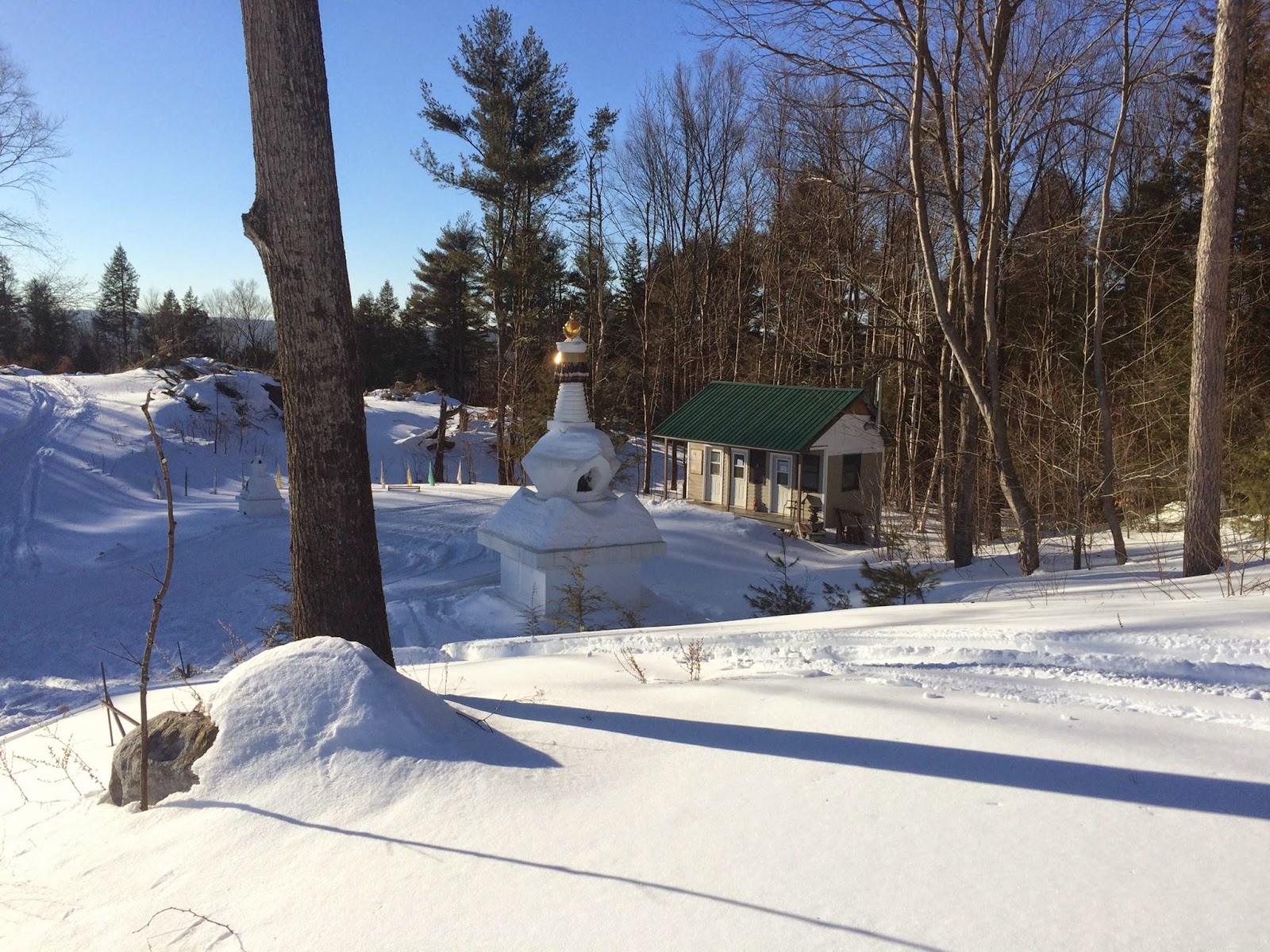 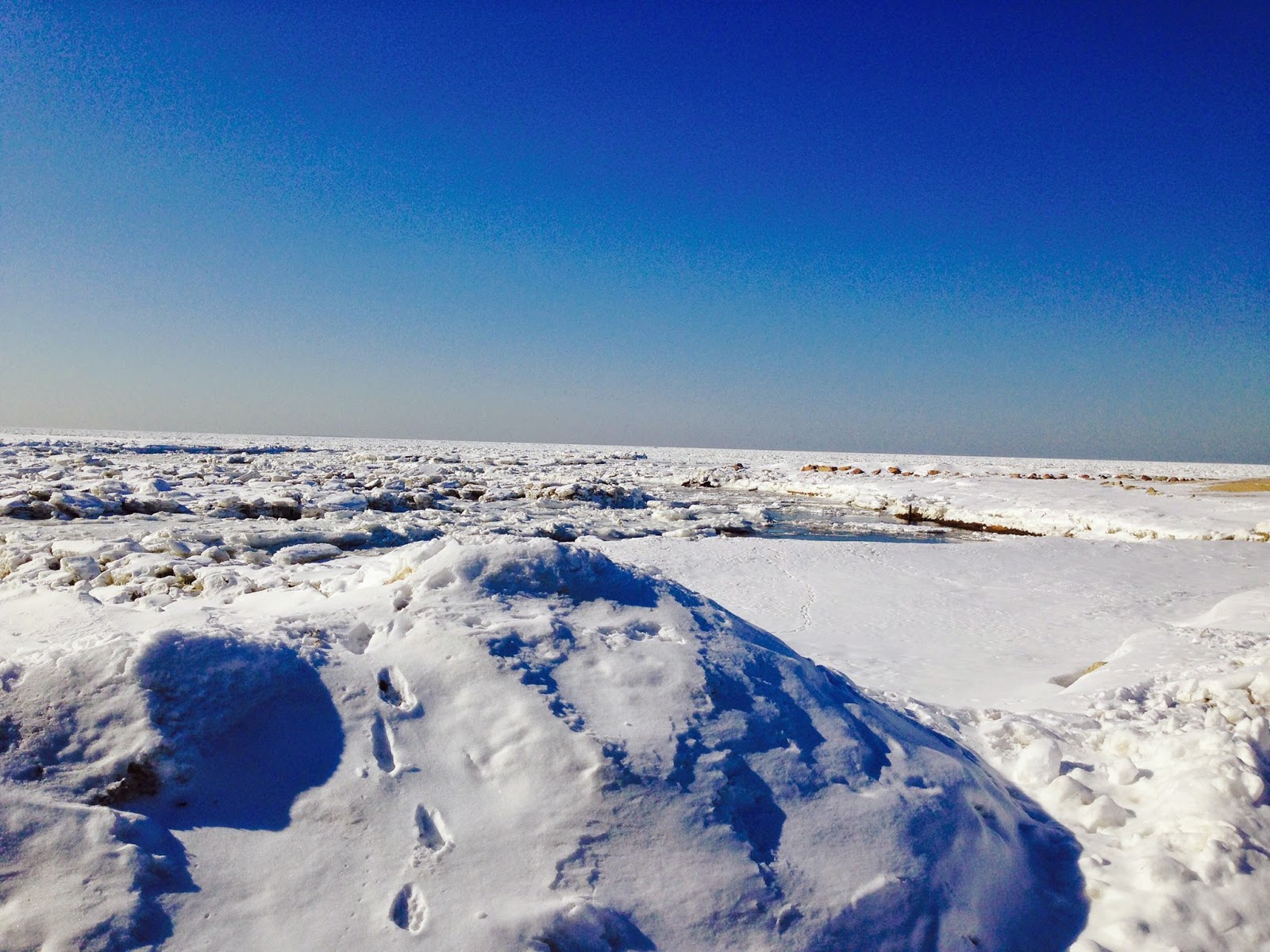 Cape Cod Bay above posted by Tibetan translator, Constance Wilkinson on her Facebook page. The Cape was specially hard hit this winter. Constance has been documenting the various extreme conditions. Below her house: 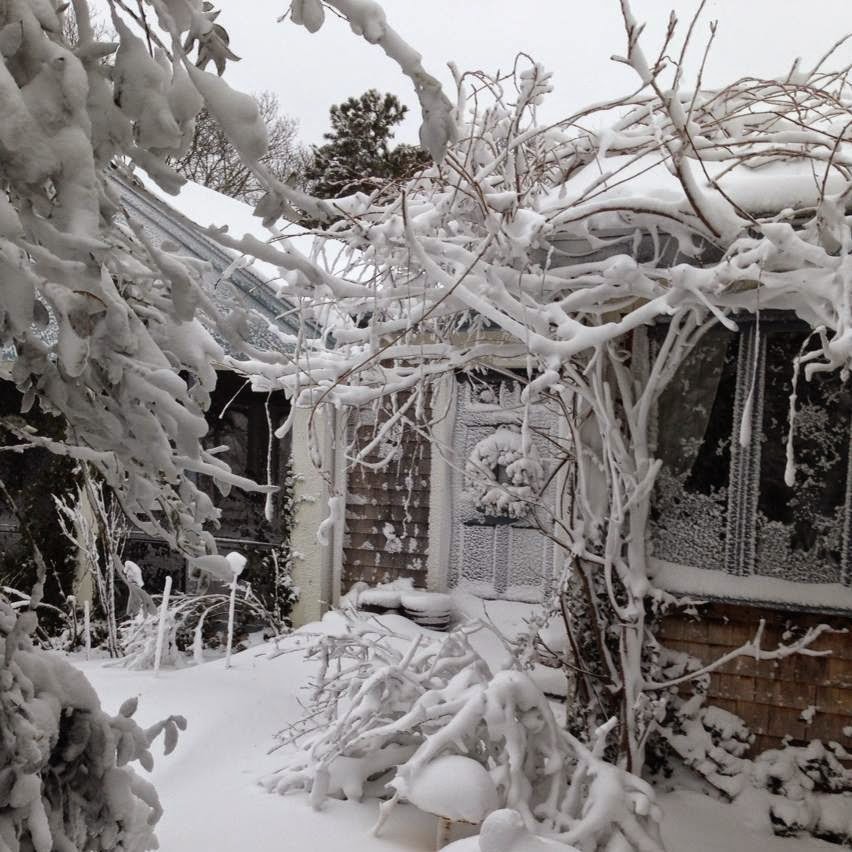 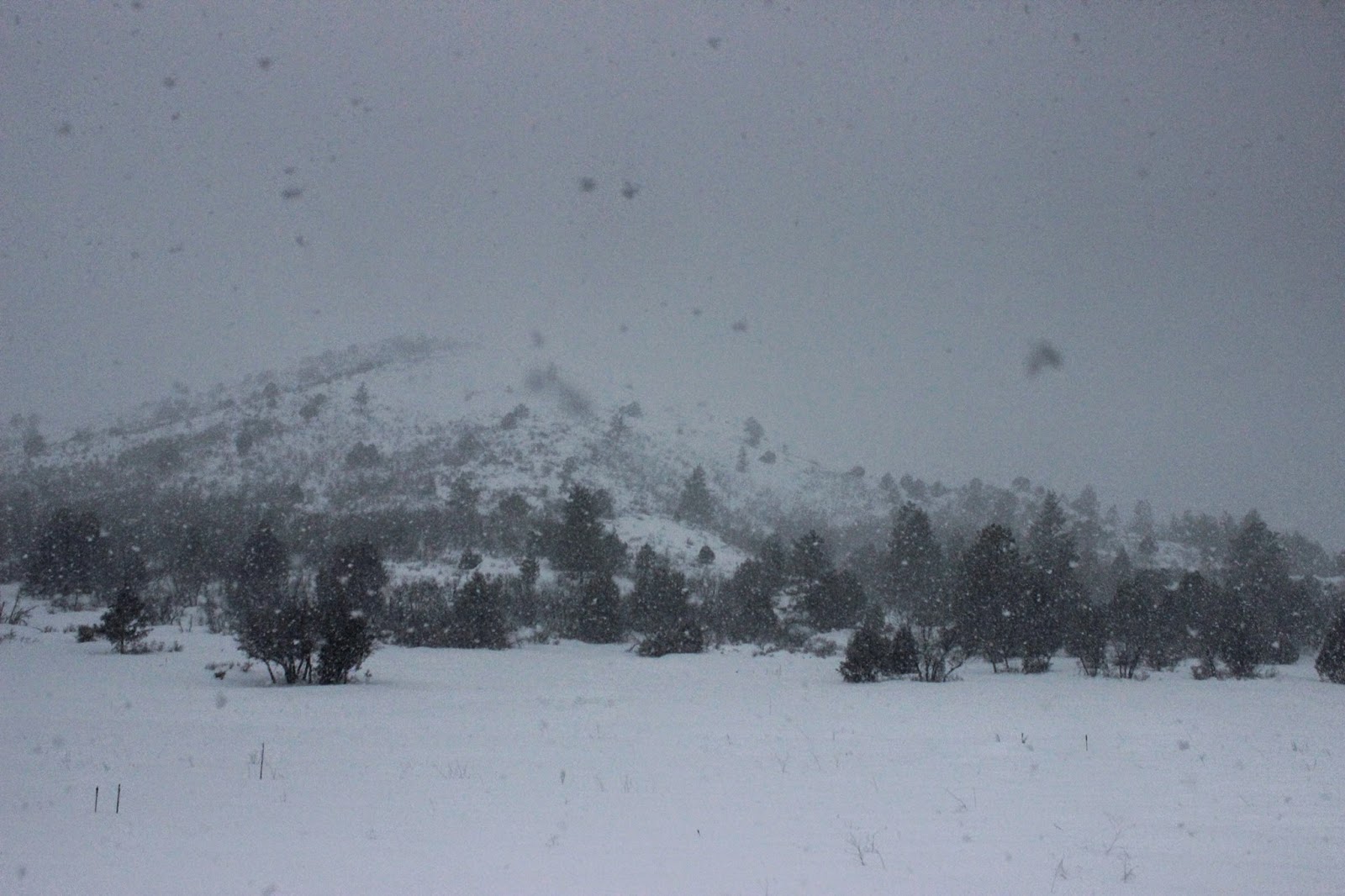 If you are a shutter bug yourself send in your own winter wonderland
photos and we will post them here.

Posted by Jacqueline Gens at 11:22 AM No comments:

The joyful Khaita songs and dances are now widely practiced all over the world. If you missed the charming international birthday greeting to Rinpoche back in December, here it is again. It very much conveys the flavor of this community practice.


During the Teacher Trainings in Dzamling Gar in January, Rinpoche again addressed the importance of these Tibetan songs and dances for the continuity of Tibetan culture. The following is reprinted from the Mirror. Click onth e link below to continue with the article.


In the program for this retreat [the Teacher Authorizations - Jan 30-Feb.4, 2015] we also have the program of singing and dancing. This may surprise many of you, for example, that many times during retreats I not only explain the Teaching and we practice together, but we also sing and dance. When I start singing and dancing most people go away. They think, “I do not enjoy this singing and dancing, this is not Dzogchen, this is not teaching”, and some people may also think, “Oh, our Teacher is doing stupid work, always singing and dancing instead of doing practice.” I imagine they have this kind of idea and that’s why they do not remain and are not participating.  To continue Reprinted from the Mirror 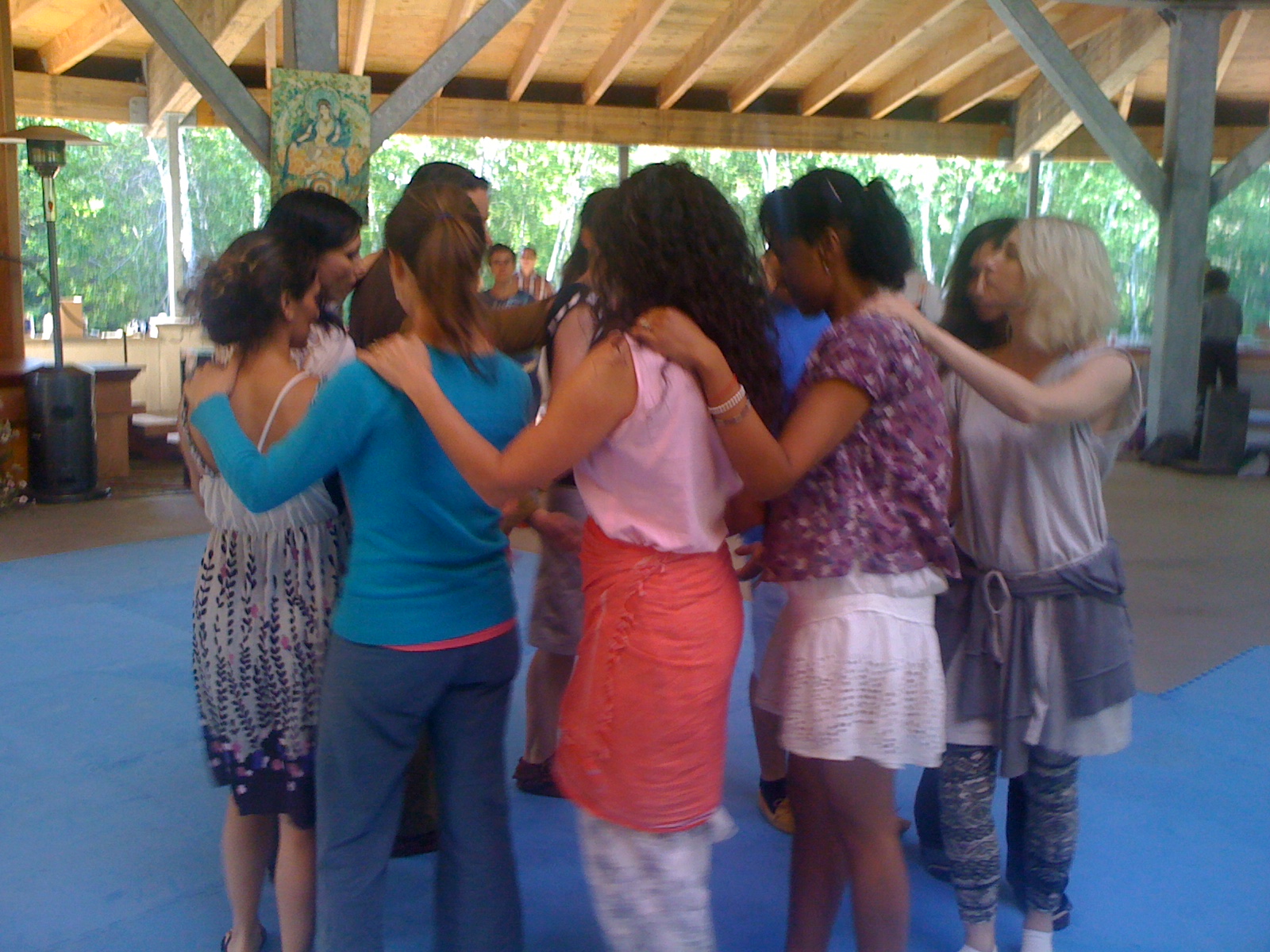 The Tsegyalgar East blog has covered this story over the past year or so from both a Tibetan perspective and Western.
Visit the links here:

Posted by Jacqueline Gens at 8:50 AM No comments: