A couple of weeks ago Naomi Zeitz and I attended a three hour workshop on pulp painting at Dieu Donne paper mill in NYC as part of our Khandroling Paper Cooperative venture. We are always seeking to improve our craft.  Here are a few examples of our work from the workshop which was mailed to us after drying. 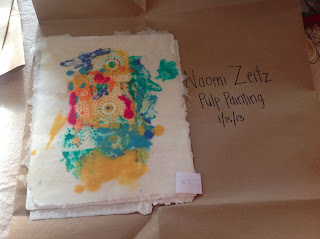 Although you can't see it here, the abaca is tissue thin and very translucent. This work is destined for our upcoming show 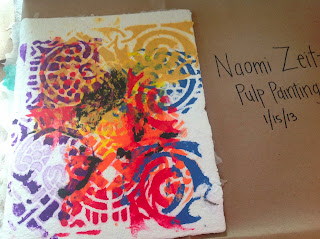 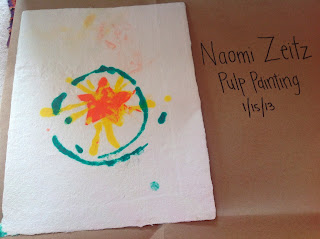 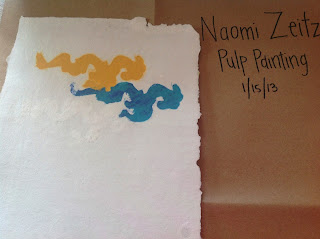 
We made a stencil of a Tibetan cloud which
worked well here. Naomi Zeitz. Cloud stencil by Jacqueline Gens 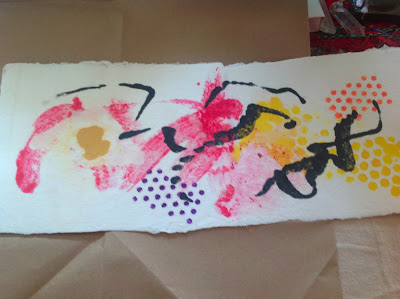 Here is my experiment joining two pieces 11 x 14 cotton paper to make a long scroll. I then experimented with a brush to paint calligraphic gestures with the pigmented pulp. When the paper tore with the use of a brush, I simply patched crudely with cotton pulp pulled out of the vat that  pressed out evenly. Jacqueline Gens

During the workshop we viewed Dieu Donne's archive of works on paper. We love pulp painting and hope to continue with our experiments using handmade stencils and pigmented pulps to add to newly made wet pieces of paper. Naomi is especially gifted at coloring her pulps. Here  she is taking notes from our instructor at Dieu Donne. 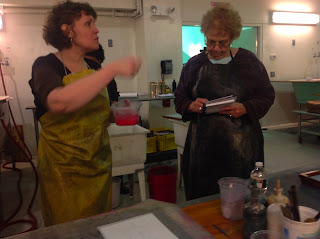 One of the main projects we are currently developing is to make paper for handmade boxes to hold crystal wands.  Each box will be made with paper infused with sacred substances we have collected. Thanks to a generous donor we have many fine crystals to use for this project. 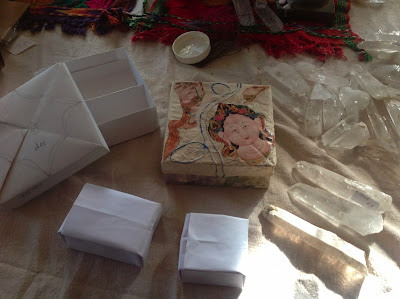 Here are some of our expermimental prototypes made by Margherita during our Janaury workshop.


Posted by Jacqueline Gens at 11:11 AM No comments:

How Zen Catalyzed Conceptual Art: A Review of Ellen Pearlman's Nothing and Everything: The Influence of Buddhism on the American Avant Garde 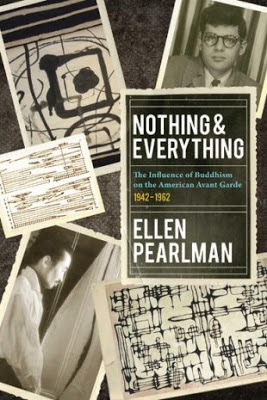 MOST EVERYONE IN THE ARTS AND AMERICAN BUDDHIST scene knows that the Beat generation provided a great impetus to the development of Buddhism in the West, especially America. Ellen Pearlman's newest book. Nothing and Everything: The Influence of Buddhism on the American Avant Garde sheds light on the unique manifestations of Buddhism on avant garde music, theater and literature.

Recently,  a review that "get's it" appeared which takes a step further and shows how Zen Buddhism, in particular,  influenced the development of conceptual art.

Ellen Pearlman’s Nothing and Everything: The Influence of Buddhism on the American Avant Garde (2012) is available from Evolver Editions for $21.95 or $15.95 ebook. Her previous books include, Tibetan Sacred Dance (Inner Traditions, 2002). She recently visited Tsegyalgar East for her annual retreat. She spends part of each year in China where she has many friends in the Dzogchen Community.You can view her award winning blog here.

Ellen writes extensively on the arts in China, Mongolia and Tibet. To read her recent article on Contemporary Tibetan Painting, click here.
Posted by Jacqueline Gens at 11:04 AM No comments: