On Tibetan Songs and Dances by Chögyal Namkhai Norbu For those who are interested in learning a Tibetan song, I prepared some. There is a reason why we learn them, it is not only because they are Tibetan songs; that’s why I prepared them, I teach and we learn them. You know very well how is the situation in Tibet. All of these songs come from Tibet, not from outside. You need to understand what they sing, what they communicate, what they want to show. You know in Tibet people are not free, they cannot talk too much, but they are not happy; they have their feelings and desires and they communicate and show them in this way.

Sometimes they sing in Tibetan, other times in Chinese, but we learn those in Tibetan. They sing also in Chinese, to make Chinese people understand the feelings of Tibetans and what they want; this is very important for Tibetans.  When they sing in Tibetan, they make also Tibetans understand their desires and, even if they are not Tibetans, when they listen they can learn and understand. They are not just love songs that say, “I love you, I am dying for you!” and you can also see where they are singing. Very rarely they perform in a theatre, they mainly show the environment, the way people look and how is the landscape. For example you can see many stupas. Stupas are not found everywhere in Tibet and China.

I cannot explain the meaning of the songs now, but we can learn and understand. I started with some that are easy to sing, because they are slow. I prepared ten of them, and this is the first…

... they really feel they are Tibetans and, more than anything, as they grow up, they find out they have a national identity, origin and culture, and that they are loosing all of this; they really feel this.  Two years ago some young poets wrote poems in a more modern, not so traditional style that have been published on many magazines. Some of these poets have been imprisoned, because they spoke too much. You can’t even understand (the meaning) well, because they are written in a poetic form, but they communicate their feelings, and the situation in Tibet. I was very surprised and this was the primary cause, two years ago. Last year I started to listen to some of their songs and music. Many of these young people became singers, some are even famous. I looked in the Internet and (realized) that 70/80% of their songs are for sustaining Tibetan culture, with their feeling; you can see it very clearly.

In some of the songs they make really understand the condition and the situation of Tibetans: “We send it through the melody, we send it with the rivers, through the air, to spread it around”, that’s what they sing.
So I became interested and started to understand a bit more of what they were talking about. I started to write them down last year, in Tenerife, going through all songs, and collecting the most important. I not only collected them, but also tried to understand the sense, sing the melodies and watch how they dance, because it is part of Tibetan Culture. Tibetan culture is not only important for Tibetans, but for the whole humankind, above all for those who follow the teachings and the spiritual path.

Teachings, a higher teaching like Dzogchen, but all Buddha’s teachings, starting from Sutra, Kanjur and Tenjur for example, and the hundreds of volumes belonging to Vajrayana, where are all alive? They are alive only in Tibet, nowhere else we can find the authentic teachings. The origin of the Teachings is India, but there’s nothing left there. Even in one of the most important places where teachings originated, Oddyiana, today’s Pakistan, where is the teaching? That’s an example. 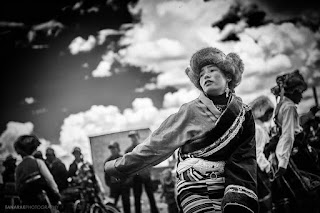 Tibet and Tibetan culture must not die. It is very important that people understand a little the sense of the teachings. That’s why I am engaged to transcribe all of these songs. If you look and compare what I wrote and what they did, you can see that I am a scholar; I studied and know Tibetan language very well. What they wrote is often full of mistakes, there is a lot of good will, but education is lacking. I tried to write everything perfectly for westerners, even if it’s been a lot of work for me. I also did the transliteration, so you can read and learn it well, and it will also be of help for your practice. Many do not read and pronounce well so, while you’re singing, you can also learn how to read (correctly).

Furthermore, when you watch (the videos), you can understand a bit. Mainly they are showing Tibetan lifestyle, the nomads, and their country, with its characteristics. They don’t want all of this to be lost.
So, sing, watch, so we can understand how important Tibetan culture and Tibetan people are.

In first place I am a Dzogchen practitioner; I am not interested in any struggle. On a relative level I belong to the cultural world, and never say anything against Chinese government; but all of this really reflects Tibetans’ feelings, so we have to understand, and not ignore it.
That’s all. This is the reason why I sing and we learn. Many people don’t understand; they think I like Tibetans songs because I am Tibetan, but it is not like that.

… if you dedicate one or two days, you can learn (drajyor) very well. Even if you learn, it still remains at an intellectual level. So, when you practice with someone who pronounces correctly, observe, read 2 or 3 times, then you really learn.  Last year, when I was in Tenerife, I started to transcribe many Tibetan songs; we read and sang them and we learned them. What’s the reason for doing that? It is not only because I am Tibetan and support Tibetan Culture, but also because Tibetan culture is important for those who follow the Vajrayana teachings. The source of Buddha’s Teachings, of Tibetan Vajrayana Teachings, are originally the kanjur and tenjur. Kanjur consists of more than one hundred volumes, tenjur of more than two hundred. All have been translated from Sanskrit into Tibetan, but their origin was India and Oddyiana. Where are these teachings now, in India, and Pakistan, which corresponds to ancient Oddyiana? They disappeared. The texts, the teachings and transmission are alive only in Tibet. That’s why Tibetan Culture is important for all of those who follow Buddhist teachings; this aspect must be understood.

Nevertheless, you know how weak is the situation in Tibet. Most of new generations are well prepared in Chinese language and culture, but not in Tibetan. Even if we try to help and develop something outside Tibet, such as Tibetan schools in India, everything is very provisional. If there are no Tibetans, if Tibetans become automatically Chinese, Tibetan culture will be lost, and it would really be a pity. I am not saying Chinese are changing or destroying Tibetan Culture, but it is naturally happening. New generations speak Chinese, because it is the official language. Even if some have a chance of learning a bit of Tibetan, they cannot use it. We know we have to work in society, and in order to find a job one has to know Chinese, otherwise one cannot do very much; in this way Tibetan culture can be lost. It is very important to help and protect.

In China for example many singers sing to support Tibetan culture. Many of them were born and grew up in China, and mainly speak Chinese, but they feel they belong to the Tibetan language and culture, which they want to protect. In their songs they describe the true sense of the situation as it is in Tibet. So these songs can become useful to make western people and Chinese, especially Chinese authorities, realize how better it is that Tibetan culture does not disappear. In the west they talk about an ancient culture, which existed in Europe, called the Viking culture. If we want to find out something about it, nowadays we can only see a few objects in the museums, that’ all.

If Tibetan books and crafts were one day just be confined in a museum, it would really be a shame. We have to be well aware, inside and outside China; that is the reason why I sing these Tibetan songs, to sustain and to keep Tibetan culture alive.  At the same time I transcribe them for Western people, so that, as they sing them 2, 3 or 4 times, they also learn to pronounce Tibetan correctly, and when they practice the puja pronounce in a perfect way. It is useful for everybody.

These are transcriptions of Rinpoche’s words, taken from different retreats. They have been collected in collaboration with Adriana Dal Borgo, Edith Casadei and Sergio Quaranta.

Posted by Jacqueline Gens at 10:04 PM