How I Met Rinpoche By Greg Johnson 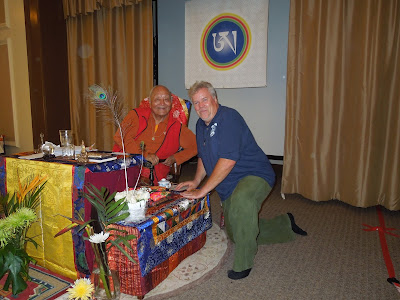 How I met Rinpoche

reprinted from The Mirror, Issue 123

The supreme good fortune of meeting Chögyal Namkhai Norbu is an occasion that I sincerely wish may manifest for as many beings as possible, and it is certainly the most precious of opportunities in this life. For me, the circumstances leading up to my first retreat in 1986 evolved through many other favorable circumstances, and I am in awe to consider the auspicious occasions that ensued. How these times of life are brought about, one never knows, despite all efforts to reconstruct some tattered threads. To recount the bumps and slides of my life along the way is to risk a fatuous exercise in pointless vanities. I dedicate it to your entertainment, perhaps a laugh or two, and testament to the supreme compassion of our precious master.

When very young I had dreams, nightmares perhaps, in which vast proportionality and microscopic tiny-ness were somehow interchangeable. Much later, reading of Milarepa staying dry in a yak horn during a hailstorm, I understood. Like others in the sixties, I was greatly amused by an English plumber claiming to be a Tibetan Lama, T. Lobsang Rampa. Soon after I encountered writings of Lama Kazi Dawa Samdup through Evans-Wentz – it was 1970 in Colorado Springs.

My freshman year at Colorado State University passed being enrolled as a philosophy major studying Eastern thought with Professor Suk Koo Lee, and expert in the work of Zhuangzi. Take away? My most carefully considered conclusions were entirely misguided, and the life of an academic would do nothing except reinforce them. I was accepted at California Institute of the Arts and declared my major in the classical music of North India, Tabla. CalArts. Ahh, the E-ticket ride down the razors edge. What’s it going to be, hedonism or asceticism? (Luckily I’ve not been forced to select.) My professor Bill Douglas introduced me to Chögyam Trungpa Rinpoche, and Bill brought me to many events, such as with His Holiness the 16th Gyalwa Karmapa in the Black Crown Ceremony at the Masonic Temple in downtown L.A.

By this time I’d been performing in concerts of the classical music of India and meeting a great many of the musicians in this milieu. Steve Landsberg and performed in concerts in California, New Mexico and Hawaii. Thus it was that I became aware of Dzogchen and discovered that a retreat was to be held in Redwood City in 1986.  When I arrived at this gorgeous piece of wooded land that summer afternoon, a kind of auction was going on such as I had never experienced.  Outside in a field, in the most relaxed way one can imagine, Chögyal Namkhai Norbu was conducting a slow motion bidding exchange: “Who will fifty” he would say in an extremely pleasant and good natured tone. Then, after several minutes, again, “Who will fifty?”  I took my seat in the grass, totally amazed by the proceedings. I could not ascertain that anyone was paying attention or communicating their bid. Clumps of friends nonchalantly chatted and laughed, and somehow the bid would be acknowledged, completely unseen by me no matter how I tried. Then, “Who will hundred?” and thus time passed by. Eventually the thanka or statue would sell, and a round of scattered applause would erupt. On to the next item. It was absolutely the most slow motion transaction imaginable, and I was mesmerized. The pure joy of it, utterly without tension whatsoever. And, somehow a transmission of the most relaxed presence throughout it all. Now, after 27 years, the Dzogchen Community in Los Angeles is alive and well, and we are growing. The journey of our sangha continues along, having survived 25 years of cultivation, energized by the amazing devotion of our precious Master. Fascinating place, Los Angeles. Much maligned, and deservedly so. I remember Alan Watts using us as a verb:  the 'Los Angeles-zation' of society, when referring to the ugly wanton suburban sprawl of consumeristic hot rodders blazing mindlessly across an asphalt prairieland. But alongside the monstrosity of Hollywood celebriosity and the endless miles of concrete, glass and steel there is also another side.

The first series of annual retreats by Chögyal Namkhai Norbu in Los Angeles took place at the International Buddhist Meditation Center - a three-story house located in a very urban neighborhood at 928 S. New Hampshire. Retreats were held in the living room, which could hold maybe 40 people sitting packed on the floor. Yet, there we were, surrounded by light.

There were three years of retreats in 1987-89 as I remember, and several in Northern California as well.  On one occasion, Michael Katz of Dream Yoga fame asked me to accompany them to dinner in small group that included our precious master. To say that I was surprised and overwhelmed was an understatement. I felt suddenly embarrassed even to admit that I needed food, much less to be in the presence of Chögyal Namkhai Norbu in a small Thai place. But, somehow, I mustered the courage and agreed. As we waited to cross the street, Michael said, "Rinpoche, I saw something really interesting in Santa Monica yesterday."  And Rinpoche replied, "No, I don't believe it. Something interesting in Santa Monica?" Instantly, a wonderfully humorous way of total presence and, in the laugh, a profound statement about the entire scene. Here we were, surrounded by the noisy smoggy rumble on one of those stinky humid L.A. nights, and, suddenly freed from any tension, the darkness sparkled. Yet though this wretched LaLa city, so devoid of any redeeming points of interest, was naked for anyone to see, out of nowhere this glimmer of “reason to be here” just … arrived, and it continues to arrive today.

Once during those days at the IBMC in which the retreat deliciously stretched long through the mornings and afternoons, having just arrived back from a lunch break, I entered the room to see our precious Master napping on the floor in the center of the room. Around the edges were various of us practitioners, not daring to peep. The magical absurdity of the moment was palpable.  How could this be? Asleep in our midst, dressed in relaxed L.A. casuals, this master of the Great Perfection totally relaxed, and then, he rose up, instantly fully awake, and began conversing with the stone statue of Buddha Shakyamuni on the alter across the room.  No hesitation, nothing to it. And we all sat transfixed, waiting for the statue to reply. Although it was not audible to us, apparently the discourse was rich and woven with meaning. All of this, to me, was miraculous. How could it be?  Beyond explanation, beyond definition. I just relaxed in the state. What else to do?

After those years there were four retreats. In 1995 a retreat took place at a camp in Malibu, and we slept over in bunk beds.  During the Ganapuja on the last day, as I sat in the middle of a sizable assembly of over 200 practitioners, the plates were distributed, and I found myself overcome with mirth. As we sang and sang A La Ho, Maha Suka Ho for what seemed like 30 minutes while everyone received their plate, I was laughing out loud. Rinpoche was laughing as well, and the room seemed filled with light. Just another incredible moment in and endless stream of revelations over the years. Fast forward to 2005 at a retreat in Topanga. I was ensconced in a small corner surrounded by mixing boards controlling the audio.  On Sunday morning the audio signal was not reaching the webcast equipment, and there was a delay for some minutes. During this time I felt a surge of pressure as I traced the connections and struggled to solve the dysfunction. On stage, Rinpoche’s presence was radiant, and then, all at once, freed from tension, the signal resumed and the teaching session commenced.  Just another concrete transmission -- allowing this instant presence to arise naturally, and the struggle ceases.

Last year our Gakyil formed for the retreat in Pasadena. It proved that an urban setting could work and propel our momentum tremendously. This year a venue in Glendale was identified for the retreat. Our Gakyil has expanded; we meet regularly and stream our practice so anyone in L.A. can participate. The schedule for this year promises Vajra Dance, Yantra Yoga, Santi Maha Sangha retreats and much more. Supreme good fortune. And may it be the occasion for benefit for all beings, in Los Angeles, on this planet, and far beyond.

Posted by Jacqueline Gens at 9:35 AM