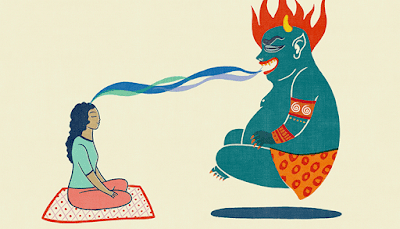 According to Lama Tsultrim Allione,

"Demons (maras in Sanskrit) are not bloodthirsty ghouls waiting for us in dark corners. Demons are within us. They are energies we experience every day, such as fear, illness, depression, anxiety, trauma, relationship difficulties, and addiction.

Anything that drains our energy and blocks us from being completely awake is a demon. The approach of giving form to these inner forces and feeding them, rather than struggling against them, was originally articulated by an eleventh-century female Tibetan Buddhist teacher named Machig Labdrön (1055–1145). The spiritual practice she developed was called Chöd, and it generated such amazing results that it became very popular, spreading widely throughout Tibet and beyond.

In today’s world, we suffer from record levels of inner and outer struggle. We find ourselves ever more polarized, inwardly and outwardly. We need a new paradigm, a fresh approach to conflict. Machig’s strategy of nurturing rather than battling our inner and outer enemies offers a revolutionary path to resolve conflict and leads to psychological integration and inner peace. For more


Lama Tsultrim, as she is now called, is deeply connected to our Dzogchen Community through what is known as an official  Dam Trog (Samaya) relationship with Tara Mandala, the organization she founded in Pagosa Springs, CO where she has established the most comprehensive trainings in the various lineages of Chod, including a 250 hour course on the Chod of Chögyal Namkhai Norbu. 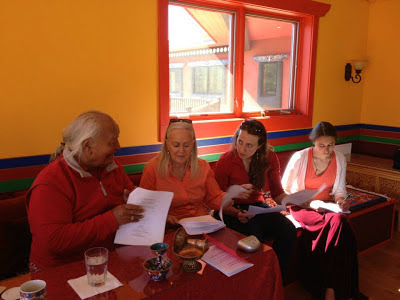 Generally recognized today as an emanation of Machig Labdron, Lama Tsultrim has widely taught Chögyal Namkhai Norbu's Chod to Westerners for decades. This Chod is a condensed compilation of all the great Chod lineages with their specific melodies that is an essential version Chögyal Namkhai Norbu received in a dream. It is especially profound and suited to Westerners due to its comparative brevity (about 20 minutes) and origin in the multiple strains evolving over centuries within Tibet . Over the years, Lama Tsultrim developed an ancillary practice called Feeding Your Demons which works with active imagination to identify and release one's inner and outer conflicts. The Lion's Roar article features a simplified version of this practice.

Tara Mandala will host the :

Posted by Jacqueline Gens at 8:58 PM