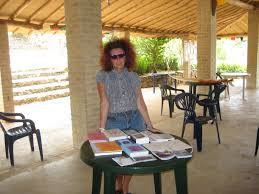 
Interview Questions on THE BOOK L

Q1. Thank you for meeting with me again today Louise. I thought a good way to start the interview would be to ask you first about the title of the book – THE BOOK L. Is it simply a reference to your name, Louise Landes Levi, or is it more than that?

LLL: I was in the Gar (Buddhist Meditation center) on Isla Margarita, in Venezuela &, one morning, I was, for some reason, visualizing the Hebrew word 'Elohim' trying to remember exactly how to spell it (in Hebrew). A bit later, I was walking to the near-by village, when sudden rain forced me to stop & take refuge on a porch. A young man, looking remarkably like the young Jack Kerouac, I later thought, had motioned for me to rest a moment, while the rain fell. He went into his small house, really a hut, & returned, handing me a Bible in Spanish. 'Read this while you wait’. The first page I opened to clearly showed, amidst the Spanish text, the word Elohim in Hebrew. It means ‘angels’ literally but as I say in the book it can translate as ‘god’ (or ‘gods’) or ‘grace’. The ‘L’ is a kind of sacred symbol and letter – as in Elohim, Allah, Hallelujah et.al. But it’s also Louise. The title is directly inspired by Bert Schierbeck’s, HET BOEK IK (transl. fr. Dutch The Book I), a post war master work in Dutch, a seminal work of the Fiftigers, a post war group in Holland, most of whose writers lived in Amsterdam. A later work of Bert’s, Zen Gardens, introduced Zen Buddhist thought to the low lands. His translator (& son-in-law) Charles McGheehan, was a friend & my host, later on, in Amsterdam.

Q2. You mention at the beginning of this book that it is the first in a trilogy. What are the other two books that make up the trilogy?

LLL: The two, in mind, at the time, Hotel Gaia (not yet compiled, except in a condensed (bi lingual Italian/English) edition: CHORMA, Porto dei Santi, Bologna 2000), a collection of retreat and other poems and A Spiritual Autobiography, parts of which are on the internet net, Louise in Afghanistan, for example but not the main piece, the title of which is A Spiritual Autobiography.

Q3. You refer to Che Guevara in the book briefly. I love the quote you mention by him – “The new man will be driven by moral rather than material incentives”. Do you think Guevara’s prediction was accurate? I don’t feel that that is the case in Japan where we are right now. What exactly did Guevara mean by this? And is he perhaps referring to future times?

LLL: I think he is talking about the utopian man, the true inheritor of the Earth, the first man, reconstituted to oppose the military-industrial complex specifically & our inability to relate, as a human community, generally.

Q4. What are your feelings about Guevara? When I was in university, every man and his dog seemed to have a Guevara T-shirt back then – either that or a Bob Marley T-shirt. What is the power of Che Guevara as an icon in the modern day? You mention in the book how his picture was everywhere in Isla Margarita. Is he perceived as the sort of ‘pin-up boy’ of the counterculture or the resistance as some make him out to be or was he actually a paranoid murderer as others have portrayed him to be in film? Which portrait is more accurate or should we accept more of a pluralistic portrait of the man?

LLL: He has survived as a symbol of resistance, renunciation & even sacrifice in the Western psyche. I am not an historian. I can not affirm or deny the opinions of others. We know that his assassination was, as were so many other assassinations directly assisted & most probably instigated by the CIA – so of course, he represents, indeed he embodied, after his death, the deeply felt desire for autonomy - indigenous resistance to the ruthlessness of imperial authority & appropriation - through out the whole of So. America.

Q5. What was the main inspiration behind this book?

LLL: I was studying on Isla Margarita, in the Caribbean, just east of Caracas, with the Dzog Chen master Namkhai Norbu who received, an indication, in a dream, that he should deliver the entirety of his dream teachings, called in the tradition ‘terma’ there, on that island. I keep to my (humble) task & a kind of solitude, even in the midst of 'sanga' (the Buddhist community), The master himself has always been very supportive of me, of my path. (His sister was a poet, tortured by the Chinese, & jailed for 30 years solely for her intellectual authority & interests.) Being so isolated, in general fr. the ‘Community', tho not at all fr. the teacher, I made 'friends' among the people. The indigenous population, living just across fr. the GAR was particularly intriguing to me, as were many of the other inhabitants. It was a time of social revolution, not very well reported in the Western Media, very fascinating as it unfolded, for better & for worse. The originality of the people on the island, the chaos resulting fr. the introduction of a well-endowed Buddhist Community there was fascinating& sometimes very distressing (see www.coolgrovepress.com/book for detail). Casa d’Esther, a local restaurant, offered itself as refuge, when the Buddhist refuge was too much for me. I did a lot of work there, sustained by ESTHER herself, the cook & proprietor. And, to my delight, a well-known editor & friend (living in NYC) also manifested (as a bird), which was both weird and wonderful. I’d spend hours practicing music in that place & noticed that grey bird, no ordinary bird I gradually understood.

Norbu has had a deep influence on me and has always encouraged me, even from long distance, like right now. He was able to extend my inquiry into poetic domain at the same time gave, access, to a fragile (& fucked up) person like myself to a certain work (on my own person), called realization in their tradition or domain. In that domain, poetry is considered a form of sadhana which in Sanskrit means ‘spiritual training’. He helped me to recover from loss, heartbreak & physical debility, at the same time permitting me access to the promise of poetry & of music, my primary interests. In Dozg chen. he said 'the transmission develops according to the potential of the individual'. 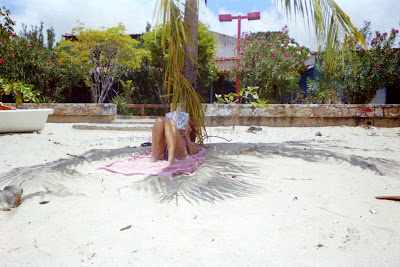 
Q6. What was it that initially drew you to the island of Isla Margarita? Was it Norbu?

LLL: Simple answer ‘yes’. The island was not far from NYC (by air). I was very fortunate to be there, living in a tent, secretly sleeping in the ‘mandala’ area & moving around on bicycle, a very organic life style. I kept my computer at the restaurant, cld. go there in the morning, to make breakfast, wash clothes etc, & in the afternoon, to work. Bless Esther.

Q7. On the Cool Grove website, it mentions that the “dangers of elitism” is one of the themes of this book. Could you elaborate a little on what exactly you mean by this?

LLL: At this distance, it is difficult to say w. freshness, but I felt that the Western Buddhists were, in general, indifferent to the native population, to their basic needs, i.e. water, books, medicine, in some cases (you can read about this, in detail in my essay Tanks & Thangkas at http://www.coolgrove.com/book_module/book_L_module.html

Hiragana – the new Japanese alphabet based on the old Sanskrit Sidham, codified by the founder of the shingon Buddhist school, in Japan, Kobo Daisch, Kokai, in the 8th century, still in use today.

Posted by Jacqueline Gens at 10:54 PM