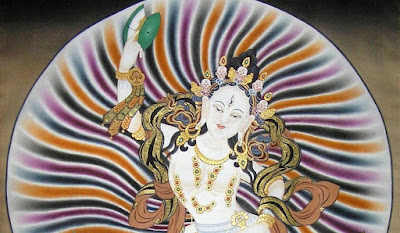 
Widely regarded as an emanation of Prajnaparamita the Great Mother of all the Buddhas, Aryatara, and Kharchen Yeshe Tsogyal, Machig Labdrön rightly takes her place in history beside eleventh and twelfth century Tibetan patriarchs such as Sachen Kunga Nyingpo, Milarepa, Desheg Dampa, Gampopa, and so on. However, she alone is credited with being the mother of an independent stream of Dharma in Tibet inspired by her visions of Tara and other deities. For this reason, Machig Labdrön’s teachings are considered to be unique amongst the eight practice lineages of Tibetan Buddhism. While never forming an independent school, the principles of Machig’s teachings were widely and enthusiastically adopted, especially amongst the Kagyu and Nyingma sects. Colleges for studying Chöd existed in Tibet until 1959, where students would gradually, over many years, first learn the liturgical melodies of Chöd by heart and later learn the instrumentation, dances, and ancillary rites. ---to read more from Malcolm's article, continue to the Levenkunst  here. Malcolm Smith has been a student of the Great Perfection teachings since 1992. His main Dzogchen teachers are Chogyal Namkhai Norbu and the late Kunzang Dechen Lingpa. He is a veteran of a traditional three-year solitary Tibetan Buddhist retreat, a published translator of Tibetan Buddhist texts, and was awarded the Acharya degree by the Sakya Institute in 2004. He graduated in 2009 from Shang Shung Institute’s School of Tibetan Medicine. He has worked on translations for renowned lamas since 1992, including His Holiness Sakya Trizin, Kyabgön Phakchok Rinpoche, Kunzang Dechen Lingpa, Khenpo Migmar Tseten, Tulku Dakpa Rinpoche, Khenchen Konchog Gyaltsen Rinpoche and many others.
Posted by Jacqueline Gens at 4:23 PM