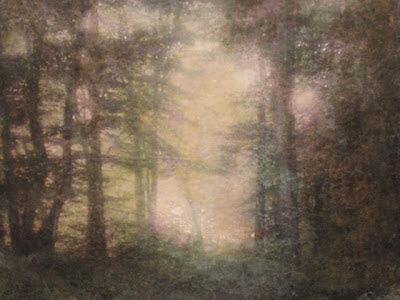 Christine Couture's small images provide a knothole view of a mysterious hidden landscape, a place not far from here, but not seen ordinarily. Ordinariness loses its meaning in the context of these perfect images.

The show will be up until May 27th, Thurs- Sun, from 1-5 at the Ursa Major Gallery in Shelburne Falls Massachusetts, 1 Deerfield Ave, near the famous Salmon Falls In Shelburne Falls, MA.

Christin Couture has a BFA in painting from the University of Massachusetts, Amherst,
studied at the Brooklyn Museum Art School, the Art Students’ League of New York, and in Bologna, Italy, and has received Fellowships from Yaddo, the MacDowell Colony, the Millay Colony, and Fondation Karolyi, Vence, France. She has exhibited widely in museums and galleries across the country and abroad such as the Brattleboro Museum; the DeCordova Museum; Dabora Gallery, Brooklyn; Monique Knowlton Gallery, NYC; Galeria Arvil, Mexico City; A.P.E. Gallery, Northampton, MA. Her paintings are included in both private and public collections. Writings about her work have appeared in the Art in America, the Boston Globe, NY Press, The Massachusetts Review, Preview Magazine. Christin lives with her husband, 3D artist William Hosie,
in Shelburne Falls and New York City.