A Taste of Honey : Preview for the 30th Anniversary Celebration 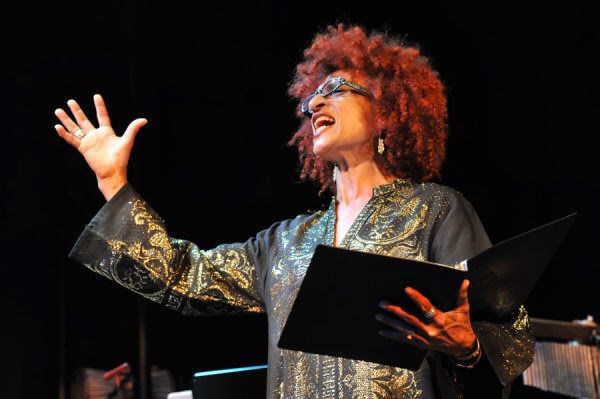 Among the many performers who will participate in our 30th Anniversary Celebration July 11-13, 2014  is local artist, Evelyn Harris, formerly of the award winning A Cappella African American ensemble of female vocalists, Sweet Honey and the Rock. In the days to come, we will feature other artists who will perform in honor of our celebration. For now here is just one offering to look forward to until we begin to present our full programing following Losar.

"Harris' artistry is in complete harmony to our community emphasis on the contemporary Tibetan songs and dances presented to us by Chogyal Namkhai Norbu which reflect the power of music to transform our world and uplift the hearts of people.

Evelyn Harris has dedicated her voice to giving depth and meaning to an extensive array of musical styles, creating stirring interpretations of African-American traditional and contemporary material, freedom songs from around the world, jazz, pop, rock ‘n’ roll, gospel and blues.

Her 18-year tenure with the internationally acclaimed Black women’s acapella ensemble Sweet Honey In The Rock guided her studies as an artist, performer, arranger and composer. Her compositions include State Of Emergency (1988 Grammy nomination), and My Lament. With Sweet Honey, she recorded and co-produced ten albums on the Warner Brothers, Redwood, and Flying Fish labels.

Evelyn relocated to the Pioneer Valley in Fall 2002. For over 3 years, she directed the choir at the North Hadley Congregational Church and facilitated writing and singing workshops with teenage mothers through the Springfield, Mass YWCA. With an emphasis on the social, political and economic conditions of Blacks in America, she has taught “Introduction to African-American Music” at the Pioneer Valley Performing Arts High School, MacDuffie School, Stoneleigh-Burnham School, Smith College, Mt. Holyoke College and Westfield State College among many others. Evelyn currently directs “The Ku’umba Women’s Chorus” at the Northampton Community Music Center and uses singing as cognitive therapy with dementia and Alzheimer’s patients in several nursing homes in the area. During the summer, she is a vocal instructor at the Jane Hanson Vocal Music Academy and the Institute for the Musical Arts Rock ‘n’ Roll Girls Camp. She has enthusiastically shared the stage with The Safari East Jazz Trio, Hip-Hop performance poet Lenelle Moise, singer-songwriter Pamela Means, pianists Miro Sprague, Jeff D’Antona, Stephen Page, Joel Martin and Jerry Noble as well as saxophonist Charles Neville. Earlier collaborations with a diverse spectrum of artists include Odetta, Holly Near, Glory Van Scott, Alice Walker, Maya Angelou, June Jordan, Sonia Sanchez, Horace Boyer, Art Steele, Jane Sapp, Zap Mama and Take 6.

Evelyn tells a story of the struggle for peace and justice through songs that confess the reveries and fears of a people intimately affected by violence and hatred. She is widely respected for the mastery of her craft and her mentorship of young musical talent. “My life is full with abundant manifestations of good. Singing is my giving back with thanks and praise.”  Reprinted from her press biography

Posted by Jacqueline Gens at 7:48 PM