What One Tibetan is Doing for His Country 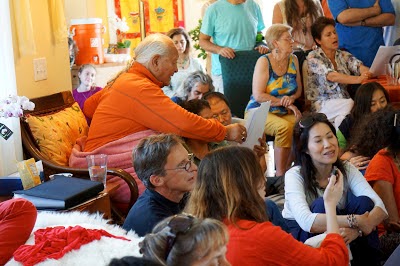 Upon the death of American folk singer Pete Seeger (1919-2014), often called the father of American Folk music,  people all over the world paid tribute to his long history of dedication for human rights through the power of song and his indomitable spirit of hope for a better world. In our times, he made the old adage "A song is mightier than a sword" a living reality.

Much feted in his senior years, for decades Pete Seeger was censored by the US government and blacklisted on TV and radio during  the Cold War era during the McCarthy years. Nonetheless, he was able to perform world-wide to huge crowds in which his many signature songs such as We Shall Overcome, Where have all the Flowrs Gone? Turn, Turn, Turn, and Guantanamera  became anthems for civil rights, the antiwar movement, migrant workers right, no nukes movement and environmental concerns among a host of many other causes he championed. He mentored some of the most brilliant song writers and musicians for generations such as Bob Dylan and Joan Baez. For seven decades Pete Seeger with wife Toshi lived in the Hudson Valley on a homestead they built themselves.

His particular genius seem to lie in his infectious invitation for creating a participatory environment in which everyone sang along with him whether they wanted to or not. This created an entirely different kind of event than being entertained by passively listening or watching.   I recently attended a lunch at the Stone Soup Cafe soup kitchen in Greenfield, MA  run by Bernie Glassman and the Zen Peacekeepers where a young man sat quietly singing Woody Guthrie's  If I had a Hammer . When another young  friend joined him in harmony--the entire cafe began spontaneously to sing along. And I mean sing as to bring the roof down.  That's the legacy of Peter Seeger! A bunch of silver haired oldsters in a soup kitchen with hungry families and street folk with kids running around and even reluctant teenagers all singing their heads off about peace and harmony. Song remains the great elevator to the human spirit in any culture and anywhere.


Pete Seeger was no ordinary folk singer but someone who inspired millions  in the age-old practice of singing. Everywhere people sing--in cafes, at work, in the shower, at school, in worship, in protest, in solitude, in groups, around the hearth and in the public square.  No culture on earth  lacks this human urge for vocal expression through joy and sorrow. From song, what automatically emerges is the movement of the body, be it dance or even simple motions of swaying, clapping, waving in rhythm as you can see in the video above. Song may very well represent the first experiences of cultural   "communitas." But more than singing, Pete Seeger taught us how to bear witness to the suffering of others using music as his vehicle to soften the hard-heartedness of indifference and hatreds. Quite simply, music can  awaken our humanity.

So what's this got to do with Tibet? Well, as most people already know, among one of the most remarkable developments of the Internet is the free video hosting service You Tube. Early in its development You Tube quickly became a living repository to archive every language and cultural group under the sun. If you ever want to learn a craft, how to play a musical instrument, study quantum physics or hear poems and songs from obscure languages--you'll find it on You Tube among the whole gamut of content.   It is the internet's finest open source of  communication along with wikipedia.  Here is where Tibet comes in.

Through a small crevice of freedom offered by You Tube, young talented Tibetans have discovered an international window through which their contemporary music videos send a message to the world. They are celebrating what it means to be a Tibetan-- their land, the preservation of their language  and the beauty of their ancient culture as important for the world.  In short, they are telling us about Tibet, a country mired in over 50 years of cultural suppression and obscurity. They are trying to save their culture through the vehicle of song and language. Indeed the topic of many of their songs is about the Tibetan language itself which recently was eradicated from school curricula proving a last straw for many Tibetans as the death knell of their culture. The voices of these courageous young singers are not about politics but about what it means to be human.

In these terrible times for Tibet when some young Tibetans tragically choose to burn themselves out of deep despair and misguided nihilism, others are creating joy through their pop songs. The contrast is heart breaking. In recent years in our Dzogchen Community what began as a personal journey of listening to the music of his people on You Tube for enjoyment, eminent scholar and Tibetan Dzogchen master, Choegyal Namkhai Norbu began to take notice of the emerging pop culture of contemporary young Tibetan singers and their importance in communicating their message about Tibet to the world.


He  recently completed the transcription and translation of 180 contemporary Tibetan songs into English--no small feat which will be forthcoming later this year. A number of these songs have been choreographed  under his direction into dances (click here to see a video of the same song performed as a dance in the Dzogchen Community) which are learned throughout the world during his retreats. About three years ago, he introduced this practice of Tibetan singing and dance for many hours at all his retreats. Although in his 70's, Choegyal Namkahi Norbu tirelessly travels the globe giving Dzogchen Teachings which he says is important in regard to the songs and music of Tibet which have a direct link to these ancient teachings. Participating in this activity also creates a positive link of solidarity to the Tibetan people at this time of their great suffering. Through his international travels to his "Gars" where Dzogchen practitioners gather together to receive Teachings, he has disseminated these contemporary songs and dances of Tibet.

Interest in Tibetan songs is not new to him. In the 1960's one of his first scholarly works while at the Istituto Universitario Orientale, was about traditional songs,  and according to his daughter Yuchen Namkhai, he  learned to play the piano when he arrived in the West in order to remember and transcribe as many traditional Tibetan songs as possible. An eminent scholar and incarnate Lama of extraordinary range, Choegyal Namkhai Norbu has done more than any other Tibetan to revitalize interest in the origins of Tibetan culture through historical works which communicate Tibet's place in the long continuum of civilizations and its treasury of knowledge relevant to the modern world. His speciality is the pre-Buddhist culture of Tibet as an ancient civilization with its own written language and culture. These works are written both in Tibetan and English, the language he mainly teaches in today.

Americans perception of the country Tibet has undergone dramatic changes over the past few decades. Today His Holiness the Dalai Lama is a household word and his face known to millions of Westerners. This is largely in response to the development of Tibetan Buddhism in the west as well as many Tibetan communities now in the US where there is a strong allegiance to maintaining their cultural identity. Twenty years ago one could find only a handful of translation of Tibetan works. Today thousands of books are published which cover the whole cornucopia of Tibetan knowledge which was preserved for centuries. .

Where once anything Tibetan was considered esoteric and mysterious --the stuff of Hollywood's Shangri La, Today Tibetan studies flourishes world-wide in academia and in film, Op-eds n Newspapers and the media routinely cover news from Tibet. Yet for Choegyal Namkhai Norbu this is not enough to save his culture. His greatest hope is that one morning the world, especially China, will "wake up and hear the birds singing"--so that the Tibetan people can preserve their language and heritage with freedom and dignity.  The medium for this message is not political agendas but the universal appeal of song and dancing.

For further information about The International Dzogchen Community's program in contemporary Tibetan song and dance, visit the following site: Harmony in the Space

Posted by Jacqueline Gens at 2:07 PM