Revisiting the 2014 FestShrift Project In Honor of Chogyal Namkhai Norbu 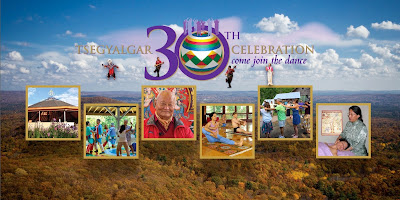 Due to some technical difficulties and just plain lack of time to complete the project, it was decided to put things on hold and to reinvent the project using the medium of a digital archive which would allow Community artists, writers, composers, and film makers to exhibit their work inspired by the Dzogchen Teachings. If you are interested in participating such a project either developing the backend web presence or submit your literary or art work, please let us know via jacqueline.gens@gmail.com

In the meantime, here is the first of a few works submitted in 2014 with artist bios. Many Thanks to those of you who already submitted work. With your permission, we will be initially posting these here on the Tsegyalgar East Community Blog until we develop a more permanent digital home. 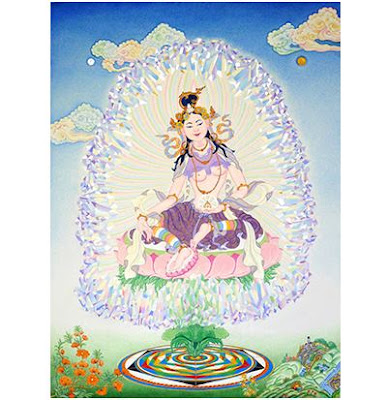 
I was already in the Dutch Dzogchen Community for one and half years, before I met  Chogyal Namkhai Norbu Rinpoche in Merigar West. From my cousin who was a Gelugpa monk, I learned to draw a buddha head. In 1994 I took the first lessons in Thangha drawing and painting with Andy Weber. In 1998 I learned from Lama Gyurmed who taught in Merigar, where he even taught me to say a mantra while cleaning the brushes because al such tools are considered sacred. In 2004 I met my present Dutch teacher; Marian van der Horst, she learned from Andy Weber and Gega Lama. Her Gadri styl is a very fine one; showing and integrating the canvas and doing a lot of shading.
Beside my 'free-work' and painting as an artist, I am nowadays more dedicated to thangha painting. Its a meditation in itself. I am full of Awe and wonder when I see a beautiful and dedicated thangha like the one now hanging in Dzamling gar; an Avelokitsvara presented to Rinpoche by Lama Denis from France.

This Goma Devi (above) is seated in the cristal cave, where Rinpoche met her the first time. The Thangha is presented to Rinpoche this year in Berlin 2014 and is now in Merigar West, as far as I know.

Ans Swart
Born in the Netherlands
Studio and residence in Amsterdam


1977 - 1982 Art Academy in Arnhem
Since than many exhibitions in and outside the country
Developing performances with sound, color and movement
1994 Thankgha painting courses with Andy Weber
1998 Lama Gyurmed in Merigar West
2004 Teachings from Marian van der Horst, Nijmegen
2010 Thangha's in prive collections. 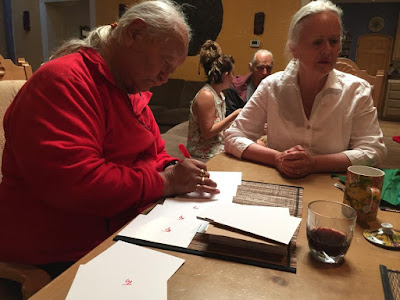 Chogyal Namkhai Norbu and Lama Tsultrim Allione July 2015 at Tara Mandala. Namkhai Norbu Rinpoche is preparing Medicine Buddha cards for participants with his Tibetan calligraphy of a seed syllable. In the past, Khandroling Paper Cooperative made special calligraphy paper for both of them:

A major mission of the Khandroling Paper Cooperative is to recycle sacred texts used to prepare special calligraphy papers for dharma Teachers and artists.

Will We Ever Find a Home?

This summer we are in temporary resting mode as we figure out the logistics of a permanent papermaking studio near Khandroling. We are awaiting a couple of options to manifest. There will be a members meeting in August to sort through our priorities.

In the meantime, there are lots of low tech activities to keep us busy and to which we invite interested people to participate. We operate mosty by donation.

I noticed that my neighbors long hand cut grass here in beautiful Shelburne Falls looked perfect for cooking up. 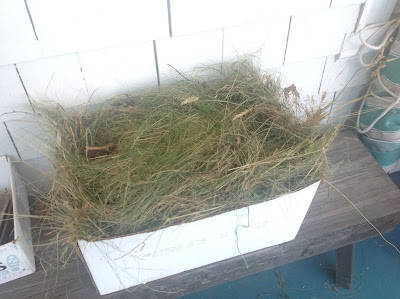 Grass makes a gorgeous inclusion to papers made with other fibers. Also Khandroling retreat center in Buckland, MA has a proliferation of Mullein on a whole mountain side where last year’s clear cut took place. If anyone would like to join us, we can harvest the plants, cook them down to break down the fibers, even make the paper up at Khandroling. Another low tech project I plan on tackling this summer is making more handmade ink. My friend Diane sent me a link that her sister sent to her about making natural different colored inks. The results look interesting as one color eventually morphs to another. 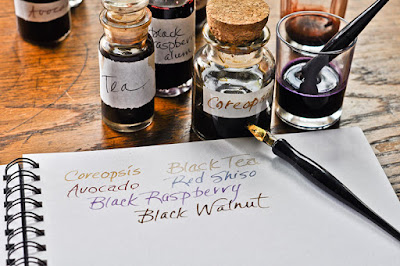 Last year we made Black Walnut ink by cooking the hulls to loosen them. What a messy process. Later we were informed that we could have simply soaked the hulls in water and then slid them easily from their outer layer. 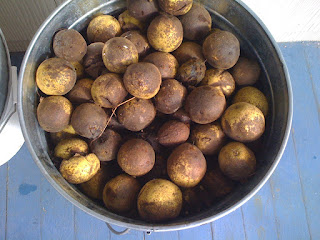 You can read about our initial venture and watch the slide show here.

Then there is also the endless preparation of rag for the Critter. Here is a recent  stash of old paper and cloth prayer flags on a friend’s porch. I will wash, then cut them into small postage size pieces along with loads of other cotton colored rag (mostly high cotton count sheets I pick up at the local Salvation Army or linen table cloths). 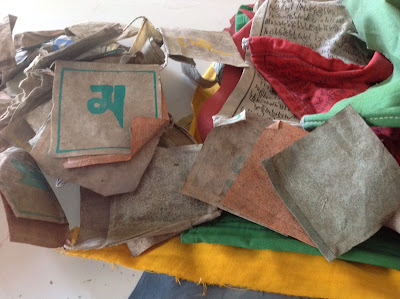 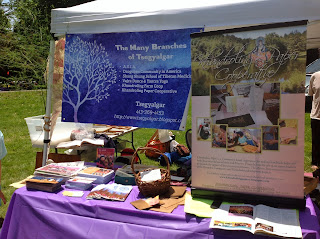 where Sheryl and Brenda did  a great interactive demo making asparagus paper in collaboration with our Tsegyalgar booth, we had small samples of seed paper which were scarfed up immediately. I’d like to make more to use up old pulp. 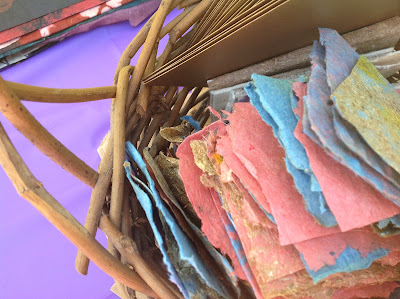 Then finally, we need to consider our 2016 submission to the International Swatch collection. We missed a couple of years, but we’re back. If the Mullein paper works out, we can submit that for our 2016 Swatch contribution which is due in October 2015. 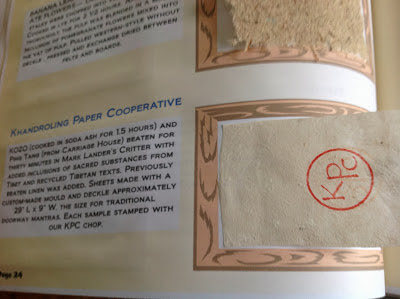 So stay tuned for our works-in-progress during this year of transition.  Contact us if you would like to participate or connect with our open studios or any of the projects above.

Posted by Jacqueline Gens at 3:15 AM