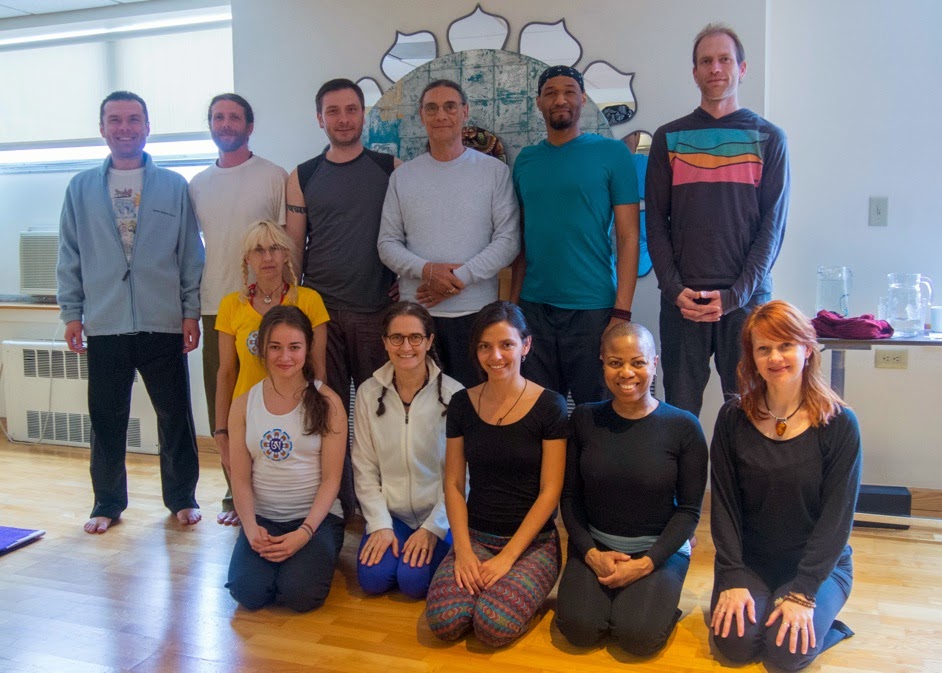 Fabio Andrico, assisted by Nataly Nitsche Di Gaetano, traveled from coast to coast of the US to give intensive open training in Yantra Yoga at Kripalu in Massachusetts and Yoga Tree in Berkeley, California, and, as well, to introduce the system of Yantra Yoga at the Rubin Museum in New York City as part of an exhibition and lecture series called Bodies in Balance: The Art of Tibetan Medicine, which runs from March 15-September 8, 2014.

Fabio delighted and charmed students and lecture goers alike with his in depth knowledge and consummate humor from Massachusetts to New York City to Berkeley. Nataly performed the movements in a fluid and inspiring way, so that all who watched felt they too could, maybe one day, attempt this marvelous method of an ancient tradition. So between the two, people had the chance to experience the dynamism and unique quality of Yantra Yoga. Fabio’s gift of explaining this profound system derived from his own understanding, experience and mastery, while making it totally attainable, is something remarkable.

On both coasts, the Kripalu Yoga Center in Stockbridge Massachusetts and the Yoga Tree Center in San Francisco, the part one intensive training courses drew the same number of eleven students. There were approximately 80 people at the Rubin Museum in New York City, where Fabio introduced Yantra Yoga as the final ‘act’ of a lecture series related to the series called Bodies in Balance. Fabio’s talk was a “stimulating conclusion” as Tim McHenry, Director of Public Programs and Performance, put it, and once again Nataly provided the masterful movements.

At Kripalu and Yoga Tree Fabio invited outside lecturers to inform the students about basic Buddhism, at Kripalu this was done by Lama Tsultrim Allione and at Yoga Tree by Steven Goodman, and also about Tibetan Medicine, which at Kripalu was done by the Director of the Tibetan Medical Program at Shang Shung Institute in Conway, Massachusetts, Menla Phuntsog Wangmo and at Yoga Tree by Adam Okerblom, a graduate of the same program. Students reported they found these lectures valuable and an important addition to their study of Yantra Yoga.

We are grateful that Fabio has chosen the US as a place in which to pursue a public presentation and experience of Yantra Yoga and we hope he will continue to do for the benefit of all those fortunate enough to participate!

This article is reprinted from the NEW Online Mirror, International Newspaper of the Dzogchen Community www.melong.com

Posted by Jacqueline Gens at 8:24 AM