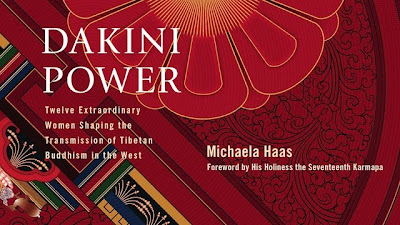 Dakini Power, Twelve Extraordinary Women Shaping the Transmission of Tibetan Buddhism in the West by Michaela Haas in many ways is a summation to date of the marvelous synergy of a feudal 17th century Tibetan ethos mingling with Western culture, mostly American--what happens, the challenges, and the results when two cultural mindsets collide. While individually each woman's story is unique and an inspiration, the bigger raison de etre this book serves is to show the evolution of the transmission of the Tibetan lineages into new soil over the past thirty years. And the story is not over, by any means.

The title of the book aptly portrays--Dakini Power, as an unconditioned force of natural mind beyond gender --unaltered and free from concepts serving as the messenger of change behind this cultural transformation. The women portrayed here are on a mission—all of them. Indeed, the context shared by all these women can best be defined as the recognition of the emerging feminine or in more standard terms a feminist perspective they each embody in their role as authorized teachers in the Tibetan lineages. We are NOT talking here of limited political ideologies or politics that taint the transmission but the actualization of an evolutionary process in combination with a deep reverence for the Tibetan traditions they represent or were trained in.  The fruits of this impact can best be summed up by the recent international news generated by the first Tibet nuns allowed to sit for their Geshe exam in the Gelug tradition.

There seems to be several types of women portrayed in the book. They are ordained nuns in the vanguard (Jetsunma Tenzin Palmo, Pema Chodron, Karma Lekshe Tsomo, and Thubten Chodron); Tibetan women (all too few) authorized by their culture to teach (Jetsun Khandro Rinpoche, Dagmla Kusho Sakya ); lay women practitioners who are mothers (Tsultrim Allione and Elizabeth Mattis –Namgyel)  and wives/consorts of recognized male teachers who teach (Sangye Khandro, Chagdud Khandro and Khandro Tsering Chodron). And then there is that hybrid between Zen and Tibetan Buddhism in the form of Roshi Joan Halifax—a force all unto herself!  If people are interested, I urge you to read this book and watch the various online interviews. Michaela Haas is a marvelous writer and storyteller who evokes the spirit and challenges of our times in vivid language. Her approach goes far beyond mere feminism. These women are not only shaping the transmission of the Teachings in the West but trailblazers in our western culture on a number of fronts in the fields death/dying, permaculture, and social justice. They also all seem to have a particular siddhi that allows them to withstand avalanches of criticism by less adventurous practitioners out to diminish their contributions.

Michaella Haas also does a great job of portraying the unique contributions each woman has made to her particular lineage and how their personal and sometimes painful spiritual development empowered them on the path as well as serves as an inspiration to thousands of others. And we are talking thousands here—men and women who resonate with these unique teachers at this point in time.

Perhaps it is time that we begin to think deeply about what does a culture imbued with the Dzogchen Teachings actually look like.  How do you define a culture based on collaboration and equality?  In what kind of culture will the living transmission of our Master thrive? What do people in our community really have to say about our community culture, that is to say, about ourselves? In our heart of hearts we know we have to evolve.

Well, the women portrayed in Dakini Power have pondered deeply some of these issues on behalf of the Teachings for decades. Maybe they have something to communicate. Their hard won confidence and joy is infectious.

Fortunately, many of the concerns portrayed in Dakini Power are being embraced by a whole new generation of young Tibetan Lamas including His Holiness the 17th Karmapa who calls himself a feminist and has an active social media site emphasizing ecology-- one of his principle interests. Here’s what the Washington Post on the matter of the Geshe exams allowed for the first time for Tibetan nuns had to say quoting the ever feisty Tenzin Palmo,
“It’s just time they get their act together and give the nuns their full ordination! “  or as Pema Chodron might say, “There’s No Time to Lose.”

Reprinted from The Mirror, Issue 122

Here's another video of Tsultrim Allione at the book launch party addressing "What is a Dakini ........She's really something in all of us..."

Posted by Jacqueline Gens at 10:15 AM