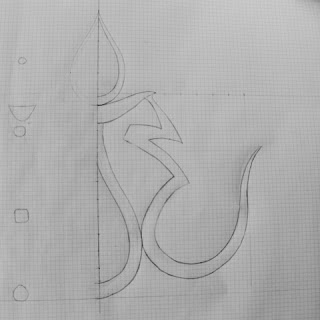 It all starts here with a drawing executed to scale. Jacqueline Gens interviews Jim Smith following the Longsal Spire installation atop the Vajra Hall on Khandroling.

Why was the Longsal Symbol chosen for the Vajra Hall spire or what does it mean in our lineage? (for those who do not know)

J Smith - In our lineage the Longsal symbol  represents the Termas of Chögyal Namkhai Norbu. Some years ago, he said that maybe we should place the Longsal symbol at the top of the Vajra Hall. He asked that we have a Longsal made of iron and gold. That was many years ago before we started building.

Can you explain the design challenges of creating a n iron and gold spire of the Longsal symbol and how you arrived at the present design?

J Smith - Well, years went by after our initial conversations with Rinpoche and the  actual construction of the Vajra Hall project.  When we began to consider the over all design for the spire, the Vajra Hall team sent Rinpoche blueprints of the building with various sizes of the Longsal so that he could see the actual scale. We asked him to choose  among the various options between four to ten feet. He chose the eight-foot version. I then made a wax model to show him. Once we came up with a scaled drawing of the Longsal that Rinpoche had chosen, we then put it on the computer and made a  two dimensional drawing exactly to scale, in order to create a plywood template. We made three copies of this wooden template--one copy for the welder to work from, the other copy for myself [Jim Smith] to create the foam dimensional aspect. The third copy went to make the letters or wings of the symbol. 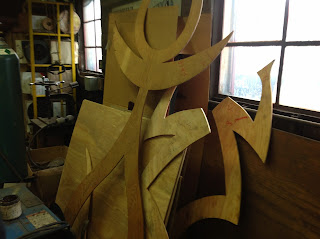 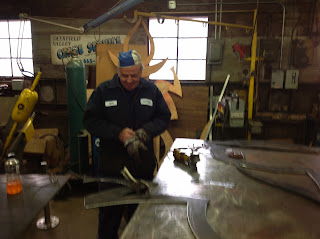 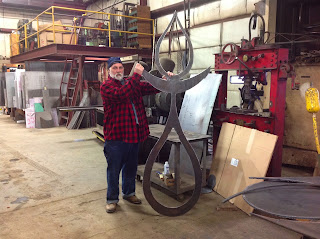 [Jim then explains what these are]

The interior circles represent thigles while the two wings indicate a letter of the dakinis. At that point we began to see the symbol in a circular thigle,  similar to what is on top of a stupa. Once the metal manufacturer received his wooden template, he made the skeleton armature from stainless steel with an interior steel designed for high stress to withstand the environmental impact over time. Simultaneously, I produced the foam model of the upper thigle and inner Longsal while John Foster made a wooden mock- up of the two letters/wings.

What was the actual production process?

J Smith - To produce the final piece we investigated fabricators and had the idea to go with fiberglass which is very strong with some flexibility that could easiiy encompass these forms. We ended up finding a company in Cleveland, Ohio. Originally, I thought, we were going to supply them with just a drawing but then I agreed to supply the foam and wooden forms to make moulds from. So we sent all the templates to Cleveland—the three different pieces consisting of metal frame, foam core, and wooden letters. There were some issues at first but in the end everything was resolved very nicely --- they filet (ed)  the foam off the plywood and then they sandwiched it to the metal framework and then applied the fiberglass skin over it. They then sanded the surface smooth which was afterwards gold-leafed in 24 carat gold sheets of 4 x 6 inches applied to the fiberglass in a traditional manner and then coated.  Finally,  the company shipped the finished spire back to us,. Once Rinpoche was in residence at Tsegyalgar East, we found an auspicious date to hoist the Longsal spire  to the top of the Vajra Hall with a crane. 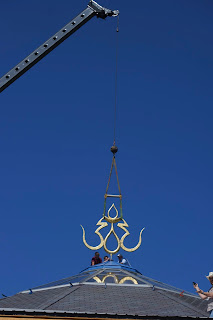 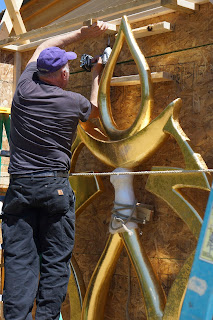 What was your experience like working on this project?

J-Smith - I went through a gamut of emotions primarily pure joy to have the skills in order to participate. It was sort of like really beautiful to be in the time and place to make an offering—with the intention to adhere to proportional consideration and for the spire to last as long as possible. Everyone  did an incredible job with heartfelt dedication—even the welder. Everywhere it’s been seen it has initiated something in people. When it was installed, many people were crying.

Posted by Jacqueline Gens at 2:21 PM