How do you say Tsegyalgar and what does it Mean? 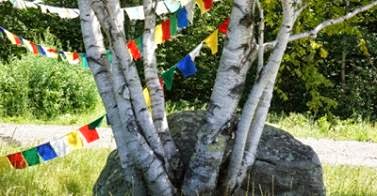 At the place of the Mandala Hall, a poignant “coincidence” from 19th century educator Mary Lyon who was born at the foot of the hill. Sounds like a Victorious Peak of sorts

"Then just beyond the precincts of the family domain was the 'top of the hill,' crowned with its high rolling rock, ever inviting the enterprise of each aspiring heart. Everyone was ambly repaid who would climb tha steep hill, and ascend that high rock."

(a letter from Mary Lyon quoted in a her 1864 biography, A Life of Christian Benevolence whose birthplace is at the bottom of the hiil)

Traditionally, in Tibet, “Gars” were seasonal encampments where people gathered together to receive Teaching. Tsegyalgar East is the Summer Gar for North America while Tsegyalgar West in Baja is the Winter Gar.

Posted by Jacqueline Gens at 6:18 PM