”…. In the year 1997 when I traveled in East and Central Tibet, I received many requests to help to build some Colleges of Study (Shedra) and Colleges of Practice (Drudra). I would like to ask the Dzogchen Communities of the world to collaborate to these projects. It is not at all easy to get permission to go to these places to work on the projects. The only possibility is that you connect with our ASIA Organization and in that way you can have direct contact with your project place or Gonpas.

Galengon or Galingteng Monastery is one of the oldest monasteries of East Tibet and was originally founded by Lhalung Palgi Dorje, a student of Padmasambhava and Sogpo Palgyi Yeshe's student. Later there was a very important Sakyapa teacher called Ga Anan Dampa and since then Galengon has mainly followed the Sakyapa Tradition. It is the main residential monastery of my uncle Khyentse Choekyi Wangchuk's teacher Grubwang Kung Paldan and, for that reason, it later became the residence of my uncle Khyentse Choekyi Wangchuk. We have a project to build a College of Study and later a small College of Practice there. I would like to ask the Dzogchen Community of Merigar to take care and sponsor Galengon so that these colleges can be realized in a concrete way.”

Galingteng Gonpa is located in Derge County, Ganze prefecture, Sichuan Province.Galingteng Monastery is considered one of the most important Tibetan cultural centres in East Tibet and is particularly meaningful to Chögyal Namkhai Norbu. It was founded in the IX century by Lha Lung Dpal Gyi rDorje, a student of Padmasambhava, who took refuge there after the assassination of the king of Central Tibet, Lhang Dharma.

Established by the Nyingmapa, subsequently it was annexed to the Sakyapa order by the regents of Derge. Still today it is characterised by its combination of practices of these two traditions.

Lha Lung Dpal Gyi rDorje, and the Mahasiddhas A Gyi rDorje, A Gnyan Kungda’Grags, Kunga Palden and Khyentse Choekyi Wangchuk are some of the most famous masters who lived, studied and practised at the monastery of Galingteng making it famous throughout Tibet.

ASIA, on the request of Chögyal Namkhai Norbu, has been operating in the village of Galingteng since 1993.
PROJECTS COMPLETED:

• an elementary school
• a small clinic, a house for Kunga Palden Rimpoche
• a traditional Study College

We have also restored the Chorten of the Monastery, the Mani Khorlo and Galen Kyentse’s house.

• In 2007-2008, through Tuscany Region funds, ASIA implemented a project aimed at the enhancement of Galingteng College. Through this project, 17 new bedrooms were built and 34 new students were enrolled in the school. The temple of the College was painted with the main deities of the Buddhist pantheon.

• In February 2009, a fire broke out and destroyed part of the dormitories previously built. ASIA immediately began a fundraising campaign and, through private donors and the funds allocated by the Tavola Valdese, the dormitories were rebuilt and the paintings inside the temple restored within one year.

• In 2004 ASIA began long distance sponsorship of the Tibetan monks living in this College with the aim to furnish them with teaching materials, food, and basic College appurtenances.

Today the Monastery of Galingteng is experiencing a period of great difficulty.
The monks are unable to devote themselves to  study and the practice because they have to worry about their livelihoods.

Khenpo Tashi Choepel has sent us this urgent request:


"The monastery is going through an extremely difficult time. Many young students have come to Galingteng to study Tibetan cultural and spiritual traditions, but we cannot undertake to pay for their upkeep. Please help us."

Of the 98 monks living in the College, 47 are supported at distance.

In order to make sure that the profound knowledge and spirituality of Tibet continues in this sacred place, we want to ensure to all the monks resident the opportunity to devote themselves to study and practice.

51 young monks need support!
The requested contribution is $400 per year for a period of at least 3 years.
ADOPT A MONK NOW!

$400USD per year to SPONSOR a CHILD, ELDER, MONKS OR NUNS.

$675USD per year SCHOLARSHIP for a child to continue to high school and/or college.

Please include name, address, email & phone number.
If you have any questions, please contact Andrea atandreamnasca@gmail.com.
Thank you. 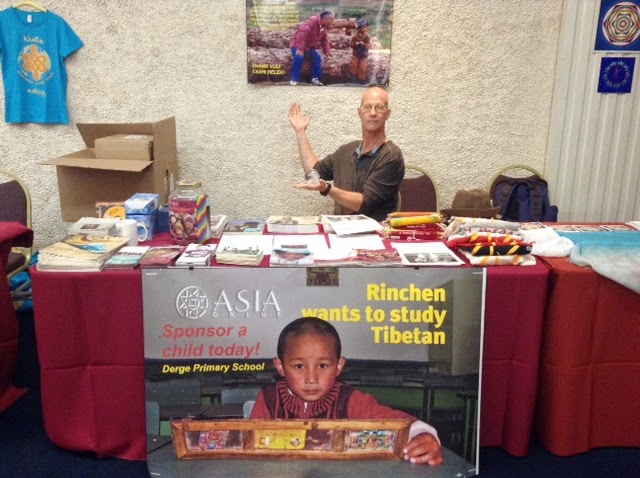 [Photo of ASIA booth at NYC Retreat by Andrea Nasca]